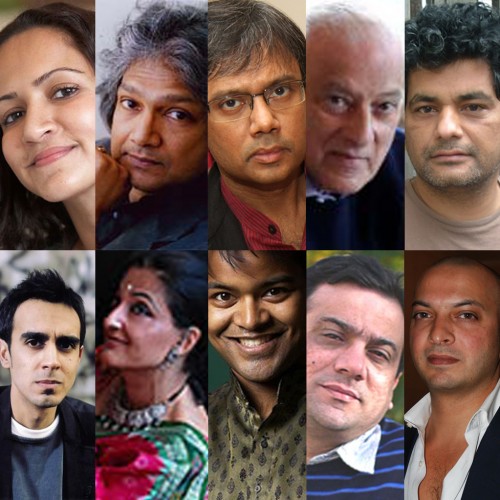 With events at leading cultural venues in London, including the Free Word Centre, British Library, the Nehru Centre, and an opening weekend at Rich Mix in Shoreditch, the DSC South Asian Literature Festival [SALF] returns to deliver a full programme of events in October, bringing together the written word with rich imagery, film, music, performance and art. Renowned authors, actors, poets and musicians – home-grown, international and from the subcontinent – and leading voices from the worlds of politics, academia and broadcasting, assemble in London and across the UK in this unique cross-disciplinary festival.

In its second year SALF is set to host top names such as Sri-Lankan-Canadian adventurer Sir Christopher Ondaatje, discussing his works and travels in a new collection of writings with Booker-Prize shortlisted author Romesh Gunesekera; celebrated Kashmiri writer Mirza Waheed pays tribute to renowned Kashmiri poet Aga Shahid Ali; Mohammed Hanif launches his hugely anticipated follow-up to the Commonwealth prize-winning A Case of Exploding Mangoes,  appearing at the festival in his only major London event; a bevvy of Britain’s critically acclaimed new writers including Nikesh Shukla, Niven Govinden, Kavita Bhanot, Suhayl Saadi and Gautam Malkani gather to launch the defiant anthology ‘Too Asian, Not Asian Enough’;  a gala-dinner to announce the shortlist of the second DSC Prize for South Asian Literature with last year’s winner H M Naqvi appearing at an exclusive event in the UK for the first time since taking home the $50,000 prize; award-winning Indian reporter and authorSonia Faleiro launches Beautiful Thing, her eye-opening account of Bombay’s dance bar underworld; a revealing look for the first time at the story behind the making of Granta magazine’s latest issue commemorating 9/11, Ten Years Later; Independent Foreign Fiction Prize shortlisted-translator Arunava Sinha arrives from India to take part in events and a workshop emphasising the importance of translating literature; and aperformance by Seema Anand on the stories from the 'Hamzanama' – a collection of Persian tales dated from more than a millennia ago.

Organisers are in discussion with more than 80 authors and artists, with the final programme to be announced early September.

The eclectic mix of events, programmed in association with a range of notable partners including the British Centre for Literary Translation, Writer’s Centre Norwich, Vayu Naidu Company, Baithak Records, The Literary Consultancy and the Reading Agency, will also welcome Chelsea Theatre and The Women’s Library as new venue partners, as well as bookshops and libraries across the capital. The festival will travel to key cities including Edinburgh, Portsmouth, Leicester and Norwich during the series of events in London.

The festival is also thrilled to announce a pilot programme for a South Asian Reading Campaign, due to take place during the first week of the festival [10-14 October]. The campaign is a book industry-wide initiative with events and promotions in schools, libraries and bookshops, and puts reading and education right at the heart of SALF’s vision for South Asian literature in the UK. Full details will be announced early September.

The DSC South Asian Literature Festival was founded by publishing colleagues Jon Slack and Bhavit Mehta, who have set up the not-for-profit organisation Amphora Arts to produce the Festival. It is sponsored by DSC Limited, one of India’s leading infrastructure companies, with a global reputation and presence across four continents. As principal sponsors of the DSC Jaipur Literature Festival and creators of the DSC Prize for South Asian Literature, SALF is a natural alliance for the company’s interests in literature and the arts.

Festival directors Bhavit Mehta and Jon Slack said: “We’re very pleased to bring back the festival for its second year, particularly within such a challenging climate for the arts. Many of our partners are back with us and it’s terrific to have the renewed commitment from DSC Ltd, and for the festival to be continuing its association with the DSC Prize. Programming the festival is what we relish the most and we’re incredibly excited at what is being lined up. There’s more emphasis on translation, a strand of the festival we intend to develop into a major component. And we’re thrilled to be commissioning an original production for the festival with the talented Soumik Datta, easily one of the most exciting performers in Britain today.”

Manhad Narula, Director, DSC Limited asserted: “We came on board as the title sponsor of the festival last year and are happy with the impact the DSC South Asian Literature Festival made in its inaugural year. It was well received in literary circles because of its specific focus on South Asian literature and we are confident it will be able to reach out to wider audiences this year and engage with new issues and themes. As a company we are committed to supporting South Asian literature which is why we created the DSC Prize for South Asian Literature in 2010 and whose first winner we announced in January this year. The DSC South Asian Literature Festival is a very valuable and important part of this vision, and we look forward to being the title sponsor for many years to come.”