Aboubakry Sy is a young singer from the Pikine banlieue in Dakar, Senegal. Better known by his nickname Abu Thioubalo, his first album, "Solution", first came out in 2009.

Produced by Prince Arts, his album quickly to reached the top of Senegal's hit parade. Solution features mbalakh ( or mbalax) – the national popular dance music of Senegal and The Gambia. 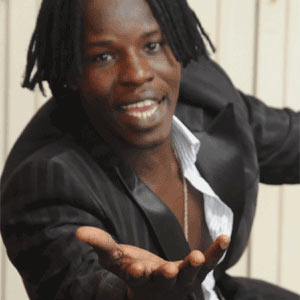 (Source: Wikipedia) Mbalax is a fusion of popular Western music and dance such as jazz, soul, Latin, and rock blended with sabar, the traditional drumming and dance music of Senegal. The genre's name derived from the heavy use of accompanying rhythms used in sabar called mbalax.

Mbalax in its current form developed in Senegal in the 1970s. Up to that time popular music was dominated by Haitian kompa, Congolese Soukous, American Soul and Funk, as well as, most prominently, Cuban music, as interpreted by Senegalese musicians.

Influenced by the 'back to the roots' philosophy of Afrocentrism and the receding influence of colonialism, artists began to mix these sounds with traditional Senegalese music and forge new sounds incorporating their new national identity.

Musicians began singing in Wolof (Senegal's largest national language) instead of French, and incorporated rhythms of the indigenous sabar drum. Dancers began using moves associated with the sabar, and tipping the singers as if they were traditional griots.