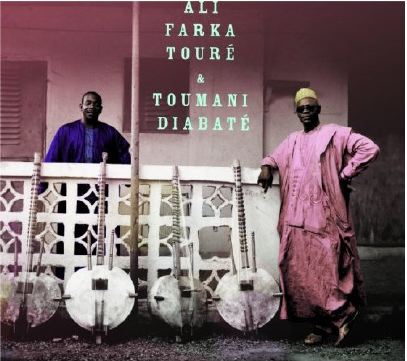 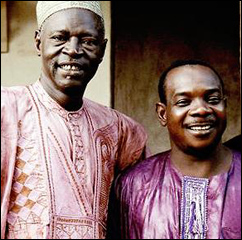 This World Circuit/Nonesuch album is the successor to "In the Heart of the Moon", the duo’s first album together, which won the Grammy in the same category in 2005.

After the success of In the Heart of the Moon, Touré and Diabaté were invited to perform a series of concerts in Europe. During the tour, World Circuit’s Nick Gold, with Moon engineer Jerry Boys, recorded Ali and Toumani over three afternoons at Livingston Studios, London, in mid-2005. Less than a year later, Touré succumbed to a long illness and passed away.

Ali and Toumani culminates a long relationship between Ali Farka Touré and Nick Gold / World Circuit that includes such internationally acclaimed recordings as The Source (1991); Talking Timbuktu (1996), Touré’s Grammy-winning collaboration with Ry Cooder; Niafunke (1999); In the Heart of the Moon (2005); and Savane (2006), among other releases.

Coming in at No. 5 on Metacritic's list of the albums to have received the highest scores of the year, namely the best-reviewed albums of 2010, Ali and Toumani, was the highest-scoring world music album on the list.

"On Metacritic, we consider 'great' albums—those we label as having 'universal acclaim' from critics—to be those with a Metascore of 81 or greater," writes Metacritic Features Editor Jason Dietz. Ali and Toumani received an 89.

The Guardian, in the album's highest-rated review on Metacritic with a perfect 100, called it "a magnificent and poignant farewell."

Learn more about this unforgettable pairing of two of Mali's finest musicians in a short film about the making of the Ali and Toumani:

After Niafunke, Touré had retired from music to devote himself to what he considered his primary vocation: cultivating the land in the Malian town after which that recording was named. He was elected mayor of Niafunke just before the Hotel Mandé Sessions began in January 2004.

Fifty-fourth in a hereditary line of master musicians and griots, Toumani Diabaté is at once revered as the guardian of an ancient musical tradition and as a bold, boundary-crossing experimentalist. He has blended ancient West African music tradition with other modern and traditional music from across the world and been instrumental in introducing the kora, a 21-string harp lute, to audiences around the world and in developing it into a solo concert instrument.

Diabaté’s The Mandé Variations was widely celebrated including critical praise from CBS News Sunday Morning, NPR and the New York Times, among others.

You can also watch these videos and many more at nonesuch.com/media.