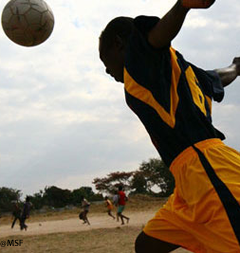 “Truly speaking, the little I know about morality, I learnt it on football pitches.”

10 June, 2010. In a few hours, the sound of a whistle and crisp thud of a boot on a football will herald a month when the world’s eyes will be fixed on South Africa, for the first World Cup ever to be held on African soil.

Over a billion people will watch the much-anticipated FIFA World Cup 2010 in the land of Mandela; thousands of tourists and fans will be in the country – bringing a staggering revenue to South Africa.

Yet, South Africa is also the country with the highest rate of HIV-infected persons in the world (around 6 million in a population of 50 million people), some of the largest and more destitute townships of the continent and an ever-widening income gap.

When Medicins Sans Frontiers (MSF) started working in South Africa, in 1999, the young republic was celebrating the end of apartheid; the then president Thabo Mbeki was denying – or at least heavily understating – the link between HIV and AIDS and worse yet denied the effectiveness of ARV treatments, considered a sham deliberately planned by the West to the detriment of the African people, favouring traditional remedies to fight against AIDS.

In that climate, MSF lobbied heavily for the health authorities to accept the international scientific community’s medical approach.

In 1999, MSF started providing HIV/AIDS and TB care since 1999 in Khayelitsha, a township on the outskirts of Cape Town, not far from the airport where football players will land, joined by the throngs of reporters and fans who will attend the grand event.

Khayelitsha is home to half a million people and has one of the highest incidences of HIV/AIDS in the country.

The Khayelitsha programme, set up in 2001 by MSF in partnership with local health authorities, was the first in South Africa to provide antiretroviral therapy (ARV) free of charge to the public. By December 2009, more than 13,550 patients were benefiting from the service.

Mandela’s help to MSF was invaluable when he visited the Khayelitsha programme, wearing a t-shirt saying ‘HIV-positive’ in front of the crowd and the tv cameras. With this simple gesture, the old Madiba stressed in front of the whole world that AIDS existed, needed to be confronted, and must be fought with ARV treatment.

Eleven years later, the situation changed, but not the needs: an estimated 18% of the population is HIV-positive; the HIV/TB co-infection is the first cause of death in infected patients; over a million people does not have access to antiretroviral treatment.

On World AIDS Day 2009, President Jacob Zuma announced a number of long-awaited changes to strategies on HIV/AIDS treatment, including the use of higher-quality drugs for initial treatment, and a new model of care to address the deadly HIV/TB co-infection directly.

But challenges remain, including the lack of specific HIV/AIDS medication to treat children and adolescents, and the need for further integration of HIV/TB treatment to cope with the high numbers of patients who are co-infected.

After years of political willingness and financial commitment to combat HIV/AIDS, donors now seem to be disengaging from the fight, leaving behind people who are still in dire need of lifesaving treatment.

Drug stock-outs and disruptions in drug supply are already a reality, and will become more frequent if sufficient funding is not made available.

To shed light on this issue, MSF will organise a unique football match during the World Cup.

The event will be the occasion to address these issues and prove that AIDS patients can live a dignified life, as long as the wealthy world does not forget them.