The illegals of today will be the citizens of tomorrow. 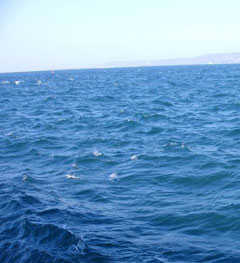 Just as the sets of the latest Berlusconi show in which he played the Hero in front of the cameras, come to Lampedusa to resolve the emergency*, were dismounted (but should the occurrence of a humanitarian crisis that the Minister of Interior had known for weeks be called emergency, incompetence or bad faith?) in the Mare Nostrum more women, men and a child have drowned.

Likewise in recent years so many more have disappeared, by the thousands or perhaps tens of thousands, fallen on the field of battle for survival.

Today all of us have seen the face of an illegal immigrant (but does the pursuit of happiness truly make you illegal?). Few realise what face that same person has after several years of illegal life in Italy.

Well, just take any one foreigner out of the more than 5 million foreigners working and living in Italy.

Right, because the statistics reveal that almost all immigrants with a valid residence permit or even Italian citizenship, had once been illegal and later legalised by way of an amnesty or a quota agreements (i.e., in a different form, an amnesty).

And if no one can stop History (even then the Northern League party ‘Lega’) this  means that in 20 or 30 years, millions of ITALIANS will have a parent who was at one point an illegal immigrant or have been themselves one.

At that point we will need to come to terms with a reality that will be bitter for those who will not have understood in time.

We know that in Italy memory often has no future, but we persist in believing the opposite. Thus we would like to recall that every year millions of Italian citizens (besides Americans) come into pilgrimage on Ellis Island. The island in front of New York where millions of poor Italians, also illegal in their search for happiness, where kept in "quarantine" (like animals).

They were the sons and daughters of a deprived Italy, and they have become among the Fathers of the most powerful nation in the world, the land of freedom where everyone is entitled to pursue happiness.

In 30 years time there will be a museum in Lampedusa (no casino, don’t be deluded/concerned by Berlusconi’s promises) where hundreds of thousands of Italians will come to find and pay homage to the sacrifices of their Fathers.

We, meanwhile, have now draped our site in mourning. We plead you to leave a comment in our space dedicated to the unknown dead in the war for survival.

From today, we will begin to build a virtual museum of immigration. Send us your photos of when you were illegal.

So not to forget.

Because there is no future without memory.

* In Lampedusa, on Wednesday, Pime Minister Berlusconi staged yet another show with loads of promises: a tax moratorium for Lampedusa (just like for L’Aquila); the army to clean the streets and harbour (as in Naples, which in the meantime continues to be overcome by the waste); migrants to be returned to Tunisia (without saying that the ministers there are changing at lighting speed and that the current government is at best shaky and that the south of the country it is unsrable); nomination for the Nobel Peace award; TV shows to promote the beauty of the island; and, last but not least, his purchase of a villa in Lampedusa found on the Internet.