From May 1, Polish workers in the UK can benefit from social security benefits on a par with Britons. 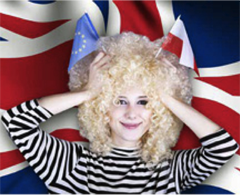 04 MAY 2011.We have the right to rejoice, because from May 1, we can benefit from social security benefits on a par with the British …

The British, according to the local tabloids, are far less happy, because they are afraid of immigration benefits. "Daily Express", for example, prophetic, claims that come not only newcomers, but also those who already are here will feel at home for good.

A few days ago, on May 1, 2011, for eight European Union countries, including Poland, the transitional period, in force since 2004, namely since accession to the EU, came to an end. Some restrictions were applied, including access to social assistance offered by the State.

From now on, Polish citizens who would like to stay and live in the UK are not obliged to apply for the Workers Registration Scheme (WRC) anymore. It has now been replaced by Habitual Residence Test (HRT), a test of residence, meant only for those who decide to work and live here for more than one month.

What is for us this: WRC and HRT? What does it mean for us?

When seven years ago, the European Union has taken into its circle eight new countries, Great Britain was one of the few European Union countries (besides Ireland and Sweden) which opened its labor market to citizens of new Member States without any restriction. Neither Britain nor the other countries had any such an obligation towards the new Member States. Each of the original Members had the right to make use of a transitional period, applicable not only to the job market, but also to other spheres of the economy such as trade, agriculture, industry.

Poland has negotiated with the European Union as many as 43 transitional periods, whose duration ranged from three to 10 years. The transition period for the free movement of person and also free access to labour market after negotiation could be maximum 7 years from the access. Great Britain was thus able to – like Germany or Austria – open its labor market only this year.

However, UK authorities have decided otherwise – they opened the market to workers from new Member States, but applied some restrictions in fear of a possible deregulation of the market. This meant the obligation to register under the Worker Registration Scheme (WRS) – (a cumbersome procedure, lengthy, and to be paid for), and partial restrictions on the right to benefits and other forms of welfare state.

Since May 1, workers from the new Member States were made equal in rights to the British. We can now apply for any kind of assistance from the state, which includes entitlement to unemployment benefits, the use of local tax relief – "council tax" on housing – council tax benefit and support to home purchase.

This does not mean that so far Polish immigrants were unable to enjoy the benefits of the British system of social protection. Yes they could, but first they needed to work at least 12 months and pay taxes and social security contributions. Now you need work more than 1 month (not 12) to get all benefits. The British tabloids denounced this as a serious threat, drawing a bleak vision, whereby the Isles are threatened by the invasion of millions of immigrants from poorer EU countries, including – of course – mainly Polish. "Daily Mail" for example, meticulously calculated that " benefit tourists" could win up to 250 pounds a week, which would have disastrous consequences for the budget. Relying on the opinions of experts, opponents of changing the rules for Poles argued that in the near future the ease of obtaining benefits may attract even 100,000 ‘benefit tourists. "

Tabloids exaggerate and scare us, and that is their charm, I fear, though a much smaller scale is warranted. Government experts, however, do not see such a risk – benefits cannot yet be obtained automatically. The Conservatives presently in power have long proclaimed that they want strict rules for granting benefits to protect the system against fraud and against the so-called ‘social tourists’. And if for example, immigrants from countries whose citizens previously needed to register with the WRS will claim benefits, they will have to meet all the criteria for a resident of the United Kingdom, a move called Habitual Residence Test.

Contrary to appearances, parasites preying on the British system of social protection should not be sought among the newcomers, at least, not only among them. Most people fishing for benefits are British. It is estimated that every tenth citizen of the UK benefits from social assistance on the basis of falsified data. Her Majesty’s Government help a more than 80-thousand-strong group of alcoholics and drug addicts survive by paying them a "weeks gross" of 90 pounds, as a benefit. Calculations of the Ministry of Health show that more than 200,000 Britons gets benefits because of the rash or nail disease. It seems that British Government did the right assessment of the situation by not seeing the threat posed by immigrants, but by their own citizens.