Take part or arrange for others to stage fake weddings, UKBA will get you 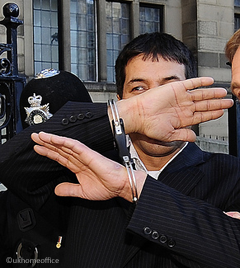 28th January 2011: You are in for trouble even if you arrange for others to stage fake weddings.

The UK Border Agency has made it clear: “Whether you take part in the marriage or arrange for others to stage fake weddings, we are determined to track down those involved and bring them to justice”.

The assertion came after the mother of a bride and a wedding couple, who staged a sham marriage in a bid to beat UK immigration rules, were sentenced.

The couple, a Czech bride and Nigerian groom, were married at St. Andrews Church, Accrington in February 2009, with the bride’s mother acting as a witness to the ceremony.

The mother of the bride Kveta Demeterova, a 47-year-old Czech, was given a suspended sentenced of 12 months for assisting unlawful immigration and perjury.

The UKBA asserted: `A sham marriage typically occurs when a non-European national marries someone from the European Economic Area, including the UK, as means of attempting to gain long-term residency and the right to work and claim benefits.

`The trio had all pleaded guilty to charges of assisting unlawful immigration and perjury at an earlier hearing.

Dave Magrath, head of the UK Border Agency immigration crime team in the North West, said: ‘These sentences send out a clear message to anyone thinking of taking part in this kind of criminal activity.

‘We have specialist teams of immigration officers and police working to investigate cases just like this to ensure people are not able to benefit from breaking the UK’s immigration laws. Whether you take part in the marriage or arrange for others to stage fake weddings we are determined to track down those involved and bring them to justice.’

The foreign nationals who married the Czech brides and grooms are currently either being prosecuted or removed from the UK.