06 March 2009 – Christina Kots-Gotlib, a 25-year-old model and former member of Via Gra girls’ band, from the eastern city of Donetsk, won the Miss Ukraine Universe 2009 beauty pageant on February 20th. She will represent Ukraine at Miss Universe 2009. 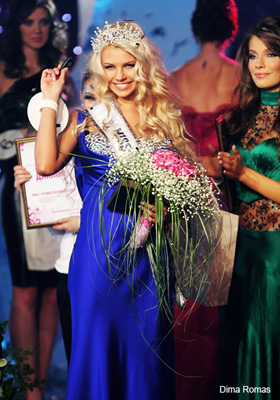 Judges, among which the son of billionaire Donald Trump, Eric Trump, and actors Sergey Zhygunov and Svetlana Svetlichnaya, rewarded her greater experience and her self-assured presence on stage.

The new Miss Ukraine-Universe started modeling while studying at the Donetsk Trade and Economy Institute. She won a dozen of local and national beauty contests, and then started a singing career in 2005 as a part of Ukrainian pop trio Via-GRA.

The title of Vice Miss Ukraine Universe went to Anastasia Paperna, the daughter of the famous Ukrainian actress Olga Sumska.

Last year’s winner of Miss Ukraine Universe Eleonora Massalab and Miss Universe 2008, Venezuelan Dayana Mendoza took part in the award ceremony, while Tina Karol, a Ukrainian singer, was one of many pop stars who entertained guests while contestants refreshed their makeup and changed for yet another stroll on the catwalk.

Apart from the title and the crown, the winner of the pageant gets the right to represent Ukraine in Miss Universe 2009. She also received a Mercedes-Benz, a monthly stipend of $5,000 for a year, and a trip to Paris.