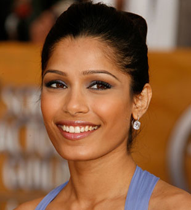 Cosmetic giant L’Oreal Paris has picked her up as a brand ambassador. After Bollywood actors Aishwarya Rai and Sonam Kapoor, Slumdog Millionaire hottie Freida Pinto is the latest celebrity from India to join the star-studded line-up of cosmetic giant L’Oreal Paris. Pinto joins Lost actor Evangeline Lily and Scrubs star Elizabeth Banks, who have also been revealed as the brand’s new ambassadors.

But now, Pinto is being referred to not because of her role in the projection of poverty, but opulence. Just in case you have missed the news the Mumbai native has been announced as the international spokesperson for the Paris-based beauty brand.

"I am very moved to be joining the great L’Oreal Paris family and all these personalities, a family I am now proud to be a part of,’ said Pinto about her new role.

The model-turned-actor, who became an overnight Hollywood sensation with the success of her debut film, Slumdog Millionaire, is currently shooting for Julian Schnabel’s movie Miral in Israel and has also been signed on for Woody Allen’s next venture.