10 January 2010. Brazil once again won first prize in what is one of the world’s oldest and more traditional pageants in the world, the International Queen of Coffee or Reina Internacional del Café.

Last year she was crowned Miss World Rio de Janeiro 2009 and competed in Miss World Brazil 2009, in which she won the fast-track event "Beach Beauty Brazil" (best in swimsuit).

She is currently studying her second year of Medicine and speaks fluent English.

Experts say the answer to the question "What are the lyrics of your favorite song" was what made Mariana Notarangelo win, as she picked up the microphone and sang a verse, but not before explaining that the song refers to the importance of being with your family to achieve your goals and dreams.

Her crowning came as a surprise to Miss Poland, Iwona Wyrzykowska (Miss World Poland 2009’s 3rd runner-up), who initially thought she had been awarded the title. As her fellow candidates told her she made it only to Vice-Queen, she took a step back and embraced the Brazilian candidate.

Lovely Miss Colombia thought she was one of finalists as well, and filed to the fore only to hear the jurors announce the name of the finalists once again, smile, and gracefully walk to the back of the stage.

Miss USA and Miss Guatemala inadvertedly decided to wear the same white gown for the final competition, leading to much amusement.

The International Queen of Coffee is one of the oldest and most traditional pageants on the planet, held in Manizales, Colombia, as part of the Manizales’ Annual Fair to promote Colombian coffee.

Brazil holds the record number of victories in this pageant: 7.

She is the first beauty to win an international title in the new decade. 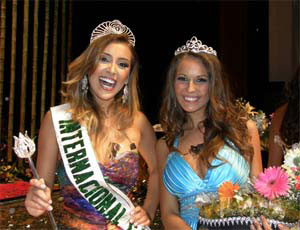