The tablet aims to revolutionise education; set to be sold at a government subsidized rate to college students.

6th October 2011:  Indians in the UK have come out with a coveted gadget – tablet computer. The device called Aakash (Hindi for “sky”) has been manufactured by UK- based Datawind, founded by brothers Raja Singh Tuli and Suneet Singh Tuli. 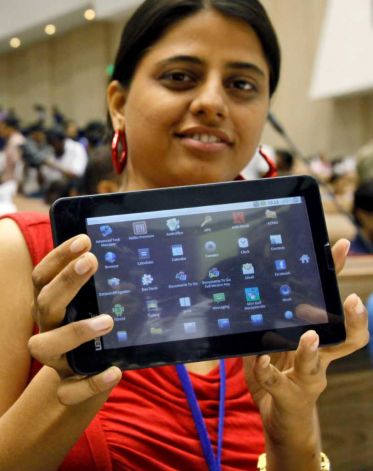 The tablet aims to revolutionise education and is set to be sold at a government subsidized rate to college students.

Aakash, India's own publicly-funded answer to the iPad 2 (and other tablets that have come to the market), was launched  by India's Telecoms and Education minister, Kapil Sibal.

The tablet will go on sale in retail for $60 without the subsidy. The device was designed by a British-based company, Datawind, and assembled in India.

According to Reuters, 100,000 units wil be given to Indian students for free with the tablet – whose name means Sky in Hindi – going on sale for $35 after a significant governmental subsidy.

The  tablet comes with a 7-inch WVGA resistive touchscreen, a 660MHz Conexant SoC, runs on Android 2.2 Froyo, coems with 2GB storage and includes a number of slots and connectors.

Datawind says that the cost of the device should be around $48 once you account shipping, assembly and the bill of material but says that the price would go down should manufacturing move to China.

Datawind is known in the UK for its small devices that include wireless GPRS broadband access. It has been rumoured that the company will be launching the Aakash in the UK under a different name and at a much higher price point.