04 April 2011. Article and interview taken from Foreigners in UK’s weekly newspaper for the Polish community in the UK: The Polish Observer 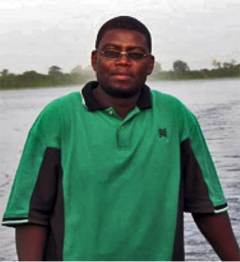 Where have you learned Polish so well?
In South Africa.

Don’t they teach Polish better in Poland?
Then, when I began studying, a trip to Poland was a dream, I could not afford it, and besides, there was no need, since I could learn at home.

Why Polish, out of all languages ​​?
I already knew French and English, and frankly speaking, I was planning Spanish or Portuguese. It never passed my mind that instead I would have learned the strangest language in the world, all the more since I did not even know that there was a country like Poland. I probably would have never learned if not for a Greek woman.

Greek woman?! And what did she have to do with it?
It was she who taught me Polish.

I guess I’m not getting it – a Greek woman, Polish?
Yes, just like that. What are you wondering, whether Greek women may know Polish? She had just come from Poland, her parents had emigrated there in the 50s and in the 80s she came from Poland to South Africa. At that time I was studying at the Technical University of Cape Town, and there I met her brother, Janis. We became friends, he invited me home and so I met his sister Janula. I have a good ear so I quickly realized that in my friend’s house they spoke two different languages. I learned that one is Greek and one Polish. I also found out that when talking with her parents, Janula preferred in Greek, while her brother Polish. Both were born in Poland, in Bedzin, and were more associated with Poland than with Greece. Polish I liked more, so Janis, and later Janula, began to teach me it.

Did Janula make you like it?
Well, that’s why I learned so eagerly. Even got married. My wife missed her Poland very much, so in the early 90s we went there. We lived in Warsaw, but I was very disappointed because the story Janula told me was that Poland was the most beautiful country in the world, while the center of the capital looked like some African suburb, not to mention the airport.
Besides, I could not get a jobs in my professions – I am an electrical engineer and I have also completed courses in accounting. Although I found a job in a small town near Warsaw, as an English teacher, but I earned very little – most of my salary absorbed by commuting. And people looked at me strangely.

Did you have any problems because of the colour of your skin?
No, not in Warsaw, but in this town they all looked at me like a monkey at the zoo. And in Warsaw I was once beaten.

Who did this, some skinheads, racists?
Not exactly. It was blacks who beat me.

Blacks?!
Why are you so surprised? As if whites did not fight with each other… It happened on the “10th-Anniversary Stadium” in Warsaw. I traded there for a while and I think I did not suit some Nigerians dealers taste, who also sold their goods there. Mine were much cheaper than theirs… So after that “accident” I gave up trading there and began to make and sell computers. I also delivered different things from Germany and Netherlands to Poland. I even set up my own company, but it was totally “eaten up” by taxes. My wife and I were practically broke. It was exactly 10 years after my arrival, and I received my Polish citizenship. In 2004, Poland joined the EU and I decided to emigrate. Meanwhile, Janula’s parents returned to Bedzin and bought the house there. We had no choice, so we decided to emigrate to London. I had no problems with finding a job.
I signed on in a large company and worked for two years in my profession, but to be honest I don’t like to work for somebody else, so I started up my own business – aconstruction company. I hired Poles, mainly Janula’s friends.
One of the employment agencies sent me some British workers, but when they found out I’m from South Africa, they all resigned. I think this is some kind of the tradition, stereotype – in the past black people used to work for whites, not the contrary.
I prefer Polish workers, they are much more precise and hard working. I think they like me too. Once one of my workers said to my wife: “You know what Janula? Your Josh is a really decent guy, even though he’s a negro!”. This is one of the greatest compliments that I have heard about me (Joshua is laughing).

Does it not insult you to be referred to as a ‘negro’?
And why, in Polish it’s not an insult – it’s like saying Indian or Asian.

Who are you more – a Pole, or a ‘negro’?
I used to be citizen of Ghana, then Kenyan, after that a South African, and now I am a Pole, a black man, but Polish.

But I’ll: write, Polish, an African.
As you wish.