Temple in Scotland reopens after overhaul

30th June 2011: Edinburgh Hindu temple & Cultural Center in Scotland has reopened after an overhaul at an estimated costs of approximately £322,000. 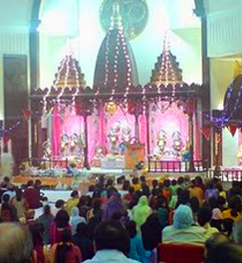 This Mandir in Leith has been comprehensively revamped with improvements to various structures, including external stonework and a new lift. Besides worship services, Mandir building can be used for cultural, educational and art activities and other community needs. Heritage Lottery Fund, Historic Scotland, and the City of Edinburgh Council also provided funding for Mandir’s refurbishing.

Hindu statesman Rajan Zed, in a statement in Nevada (USA) today, applauded efforts of Mandir management and Leith-Edinburgh and surrounding area community for these renovations to the wonderful Hindu temple complex.

Rajan Zed, who is President of Universal Society of Hinduism, further said that it was important to pass on Hindu spirituality, concepts and traditions to coming generations amidst so many distractions in the consumerist society and hoped that these Mandir activities would help in this direction. Zed stressed that instead of running after materialism; we should focus on inner search and realization of Self and work towards achieving moksh (liberation), which was the goal of Hinduism.

Acquired as an old Presbyterian Church in 1986, this Mandir reportedly celebrates festivals of Mahashivratri, Ramnavmi, Janmashtmi, Ganesh Chaturthi, Navratri, Karvachauth, Diwali, etc. Naren Sood, Bimal Giri and Mukund Joshi are President, Vice President and Secretary respectively of the Mandir, one of whose aims is "to promote Hinduism".

A detailed book written by Malory Nye was published in 1995 on this Mandir titled "A place for our gods: the construction of an Edinburgh Hindu temple community" by Curzon Press (Surrey).

Leith, where Water of Leith River meets the sea, is the port of Edinburgh. Here all boys received free education from onwards of 1555 and all girls were educated for free starting 1820. Notable persons associated with it include author Irvine Welsh, snooker player Chris Small, pop artist Eduardo Paolozzi, etc.

Hinduism, oldest and third largest religion of the world, has about one billion adherents.