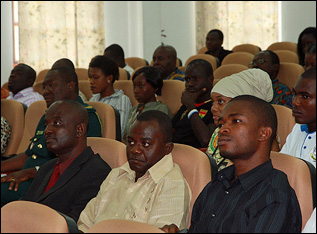 30th September 2011: Green praised the contribution Ghanaians have made to the UK’s economic and cultural life and spoke of the benefits well controlled immigration can bring, before explaining how and why the government is reforming – and restoring a sense of fairness to – the immigration system.


The appreciation came after some of the brightest and best students in Ghana received an update from Immigration Minister Damian Green on major reforms to the UK’s immigration system.

As part of a three-day visit to West Africa, the minister was invited by the University of Ghana’s Centre for Migration Studies to address students in Legon, Accra.

The minister’s visit in Africa began with a series of meetings with senior politicians in Nigeria during which, among other issues, he pressed for closer co-operation on the return of Nigerian nationals with no right to be in the UK.

A similar arrangement was discussed with the Ghanaian Interior Minister, leading to an announcement on Wednesday that the UK government would transfer 80 Ghanaians who have finished serving their jail terms in that country to Ghana as part of a prisoner-swap arrangement.