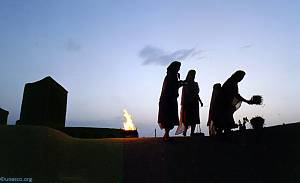 NAW-RUZ, 21 MARCH 2011. Happy Naw-Ruz to our Baha’i readers and to all readers from Iran and from the several countries that share this holiday!

Naw-Ruz or Nowruz (`New Day’) marks the first day of Spring and the beginning of the Iranian year. It is celebrated on the day of the astronomical vernal equinox (the start of Spring in the northern hemisphere), which usually occurs on March 21. Since ancient times it has been the great national holiday of Persia, the only holiday celebrated by more than one religious group. The festival lasts for thirteen days and is a time of renewal and joy.  It promotes values of peace and solidarity between generations and within families as well as reconciliation and neighbourliness, thus contributing to cultural diversity and friendship among peoples and different communities.

Naw-Ruz is observed wherever Iranian culture has penetrated, notably among the Zoroastrians of India, the Iranian diaspora and the faithful of the Baha’i religion all around the world. The holiday is celebrated today in: Afghanistan, Albania, Azerbaijan, the Former Yugoslav Republic of Macedonia, India, Iran, Kazakhstan, Kyrgyzstan, Tajikistan, Turkey and Turkmenistan.

The Bahá’í Faith is a monotheistic religion founded by Bahá’u’lláh in nineteenth-century Persia, emphasizing the spiritual unity of all humankind. There are an estimated five to six million Bahá’ís around the world in more than 200 countries and territories. Naw-Ruz, it is one of the nine Baha’i holy days on which work is suspended.

Inscribed in 2009 on the Representative List of the Intangible Cultural Heritage of Humanity as a cultural tradition observed by numerous peoples, International Nowruz Day was proclaimed by the United Nations General Assembly, in its resolution A/RES/64/253 of 2010. 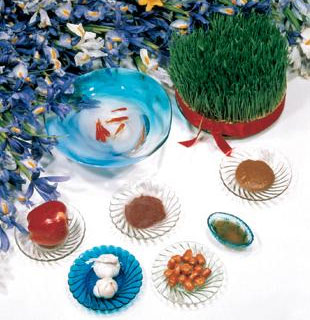 Naw-Ruz is celebrated rather like the Christian Easter, with many symbols indicating Spring and renewal.

To this day, a few weeks before the new year, Persians thoroughly clean and rearrange their homes. They buy or make new clothes, bake pastries and germinate seeds as signs of renewal.

A week or so before the holiday lentils are placed in a dish to sprout into a mass of green blades. On the day of Naw-Ruz the family gathers in new or freshly cleaned clothes. The table is decorated with fruit, cakes, coloured eggs and other treats, as well as symbolic objects such as a holy book and a mirror.

The ceremonial cloth known as Haft-Seen is set up in each household: the `seven S’s’. These are seven objects beginning — in Persian — with the letter `S’, such as hyacinths, apples, lilies, silver coins, garlic, vinegar and rue, decoratively arranged on a table. A great deal of time is spent exchanging visits with friends and relations.

The celebrations end on the thirteenth day of Naw-Ruz with a picnic in the country. The sprouted lentils are thrown into running water, carrying away the bad luck of the previous year.

The origins of Naw-Ruz are lost behind the curtains of time. While legend attributes its foundation to the mythical antediluvian King Jamshid and his victory over demon hosts, the celebration is probably of agrarian origin, associated with a fertility cult of ancient Near and Middle Eastern regions.

Naw-Ruz and Mihrajan, the corresponding festival of the autumnal equinox in September, are the two great annual festivals of Zoroastrianism.

Originally a sombre festival dedicated to the spirits of the dead was held for five days ten days before Naw-Ruz, followed by a further five days corresponding to the Baha’i Ayyam-i-Ha.

Later Naw-Ruz gradually became a secular holiday and as such it continued to be observed even after the triumph of Islam in Iran. Muslim kings in Iran, like their Zoroastrian predecessors, celebrated Naw-Ruz with great magnificence. As late as the nineteenth century Naw-Ruz was the only day the Shah would dine with other people.

Shi`i traditions attributed to the Imams endorsed the observance of Naw-Ruz, which was, it was said, the day of many events of great religious significance, among them God’s first covenant with mankind, the first rising of the sun, the grounding of Noah’s ark on Ararat, Gabriel’s first appearance to Muh3ammad, the destruction of the idols in the Ka`bih by `Ali, Muh3ammad’s appointment of `Ali as His successor, the appearance of the Qa’im, and the final triumph of the Qa’im over the Antichrist. Such traditions echoed similar accounts of Naw-Ruz found in Zoroastrian literature.

The Babi and Baha’i Naw-Ruz

In the Badi` calendar of the Bab, Naw-Ruz is the day of Baha of the month of Baha, a day called by the Bab `the Day of God’ (yawmu’llah). It was also the `Day of the Point’ (yawm-i-nuqt3ih) — i.e. the day of the Bab. Finally, it was a day associated with Him Whom God shall make manifest, the Promised One of the Bab.

Naw-Ruz is one of the nine Baha’i holy days on which work is to be suspended. It is generally observed with a meeting for prayer and celebration — often combined with a dinner since the sunset on which Naw-Ruz begins ends the last day of the Baha’i fast.

Source (among others): "Naw-Ruz: The Baha’i New Year ", by John Walbridge