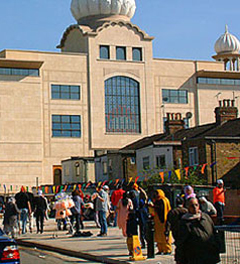 01 December 2009: Struggling to find part-time jobs in the days of recession, Indian students in the UK are compelled to depend upon gurdwaras in Southall for their subsistence.

The students coming to the UK for pursuing courses in colleges find it tough to land up with part-time jobs for funding their stay and studies; and are compelled to eat in the gurdwaras in Southall.

According to available information, the number of Indian students coming to the UK has registered a three-fold increase ever since the points-based immigration system was introduced in April this year. A substantial number of students come with the hope of finding work, while studying to sustain themselves during their stay.

A BBC Radio 5 documentary makes it clear the situation turns nothing less than desperate for the students, who fail to find work. The fact that they are reluctant to return to Indian for the shame that will follow only makes the matters worse; and many of them flock the gurdwaras in Southall for free food.

The documentary, “broadcast yesterday”, quotes student Nitin Walia, who has sought refuge at the gurdwara. He is quoted as saying he cannot afford to rent a room and was borrowing money from relatives at home for even bus fare to college.
Walia adds he can only rent a room, if I can find a job.