18 November 2010: ‘Nigerian Idol’, the biggest title in Reality Entertainment TV, will go on air in the UK from 21st November. It is the biggest search for a solo pop superstar ever, a show that gives the public the unique opportunity to launch the career of the next pop idol.

The judges’ brutally truthful comments are anticipated with equal fear and hope by the contestants, though ultimately it is the viewers’ votes which decide the winner. ‘Nigerian Idol’ is a young, exciting, inclusive, family-friendly phenomenon, and its audience make-up reflects this. 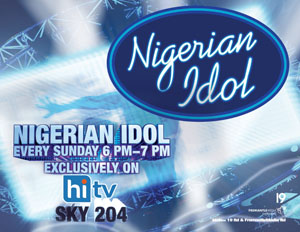 It was created by Simon Fuller as a spin-off from the British show ‘Pop Idol’. Debuting on 11th June 2002, the show has since become one of the most popular in the history of American television with franchises in 42 countries including Nigeria.

Set in Nigeria, ‘Nigerian Idol’ is the ultimate search for the best singer/superstar from around the country. Licensed by Optima Media Group (OMG) for Nigeria & Pan Africa, ‘Nigerian Idol’ has partnered with HiTV to air worldwide, including the UK & America especially to Nigerian/Africans in the Diaspora.

Project Manager Chichi Nwoko told journalists in Lagos this week that “TV audiences and music fans should get set for the biggest musical talent show of 2010.”

This is a massive coup for HiTV UK which sets it apart from its broadcast competitors in the provision of relevant and exciting content for its audience. Speaking on the massive coup for the station, Business Development Manager Mr. Tunji Amure reiterated the need to offer UK, European and American viewers quality entertainment with undiluted viewer experience. “Nigerian Idol will be groundbreaking in so many ways, especially that it is the first successful reality TV format with worldwide success imported back to the UK for our primary audience.”

The show is billed to be a huge sensation within the African and Caribbean community. With the current success and popularity of shows like the  X Factor, ‘Nigeria Idol’ is guaranteed to bring exciting African talent and showbiz to UK’s huge African Diaspora community.

‘Nigerian Idol’ will broadcast on HiTV UK Sky digital channel 204 across the UK, Europe and in America via the Dish Network for 17 weeks starting Sunday 21st November 6pm-7pm.