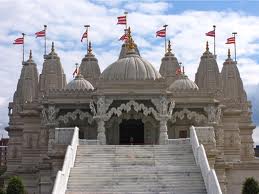 The £1 million BAPS Shri Swaminarayan Hindu Mandir has been thrown open to the devotees. It was opened in Belgrave section of Leicester in England with a colorful procession through city streets and two days of celebrations. Statues of deities were paraded through the city streets on decorated floats in a procession followed by folk dancers in traditional dresses and music as a part of the opening ceremonies. Consecration of statues and prayers were also held. This mandir, which features three sikhar towers and was approved by the City Council in 2008, besides regular worship services, will reportedly have provision for morning-evening aarti, sports, Indian music and classical dances instruction, community meetings and Gujarati classes. Applauding the efforts of Mandir management and area community for realizing this wonderful temple complex, Hindu statesman Rajan Zed said it was important to pass on Hindu spirituality, concepts and traditions to coming generations amidst so many distractions in the consumerist society. He expressed hope that this new Temple would help in this direction. It reportedly took two years, an army of volunteers and architects/engineers from two continents to convert a former industrial site to this Mandir, which contains two inner temples and an assembly hall. This Mandir complex will reportedly have over 100 parking spaces. Temple management, in order to keep the traffic congestion to minimum, is encouraging worshippers to walk, cycle or use public transport; and might use shuttle service to temple on major festivals. Established in 1907, Bochasanwasi Shri Akshar Purushottam Swaminarayan Sanstha (BAPS) with headquarters in Amdavad (India) is “a socio-spiritual Hindu organization with its roots in the Vedas”. Worldwide, it claims to run 3300 centers, 5400 weekly assemblies exclusively for children and 7215 for others, eight hospitals and healthcare clinics treating 415,000 patients annually, 31 educational institutions, tree plantation-water conservation-recycling projects, 800 centers for tribal upliftment, and over 700 mandirs; and has over 800 sadhus and 55000 volunteers. Belgrave, home of 1969 launched Milans Saree Shop and Golden Mile (with concentration of gold selling shops), is represented by Councilor Rashmikant Joshi.