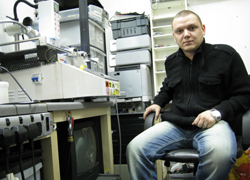 When your laptop or iphone breaks down, the standard method of repairing it is to remove large parts of the components and replace them with new ones, which usually cost lots of money. But now, a Romanian computer engineer, Relu Ionut Răileanu, 30 years old, became very famous in London for his talent of reviving and repairing ”dead” computers or laptops without being needed to spend lots of money.

18 February 2011. Relu Ionut Răileanu is 30 years old and he was born in North East Romania, in a city called Roman.

He was passionate for electronics since he was a young child, when electronics were for him like a game of LEGO. "If you know the general rules of electronics than you can easily find out where the fault is,” he says.

After working a few years in his hometown in Romania, he decided he had to go.

"In Romania you cannot make money doing what I do. For example, I charge £100 for a certain repair in here, but in Romania I would have been paid only 10 Euros”.

The first time he tried to get out of Romania, in 1997, he got caught in Hungary and was interdicted to enter the EU for 5 years. Finally in 2006 he managed to go to Italy. In Sicily he started working in computer and TV repairs for 2 brothers, from two different cities.

" My wife and I were managing pretty well but the crisis came and it became very difficult to handle things, so we had to go”. Another reason that contributed to his decision of leaving Italy was the racism there towards Romanians.

In the summer of 2009 he sent his daughter and wife to their home town and he came to London.

"I took a risk coming to London, I did not know anyone but I had some money in my pocket. After one week I was already working in a big shop with electronics in centre of London, near Oxford Circus. Shortly I became a manager – I was taking care of the payments, of the customers and also I was doing the repairs”.

Unfortunately he had disagreements with the owners of the shop. "They wanted money without an explanation. You can say that they were even stealing money from the customers. Also, I needed special equipment for repairs, but the owners did not want to invest in anything. I even fixed laptops with the kitchen knife. They were not professionals so I had to move on, I knew I could do more”.

For more than 6 months now, Relu has his own business, together with a partner. His shop is in Tower Bridge Road, close to his rented apartment where he lives with his wife and his daughter. The company is faring really well – they became very famous for being able to "bring to life dead laptops, ipads or iphones".

How is this possible? The answer is simple: devices that help him fix microchips.

"We do not replace the whole motherboard of a laptop or its keyboard or screen. I take the motherboard apart and I find out which chip has the fault and I repair it with a piece of equipment bought from China, which costs over 2000 GBP.

"Thank to this equipment, I am able to repair small components and not only to replace them. Not anybody can do this kind of repair. As far as I know, there is only one person who is doing this in London.

"The laptop components are produced in series, following a certain standard and you have to be a very good specialist to be able to take them apart and put them back on. What I do is similar to surgery: I have to be careful and to intervene with maximum precision”.

So, instead of paying 300 GBP for a new motherboard for your computer you can go to Relu and he will fix it up for 100 GBP. The same thing applies when you want to recover data from the hard disk. In a usual workshop you’d pay 300 GBP and wait 2 weeks; but in Relu’s shop you pay only 80 GBP and it takes minutes. The advice that Relu is giving to all of us is not to stock information on volatile electronic memory, external hard – disc or memory sticks. The safest way to keep important information is writing a CD.

When asked if he would like to go back to Romania, Relu’s answer is firm, "I doubt I will ever go back to live in Romania. I have been in our hometown with my family for Christmas, and I am very disappointed and sad for the way people are living their lives in there. The prices for food and utilities are almost like in UK, but the income is very low. I have no idea how people in Romania manage to survive”.

For the future he plans to buy a house in UK even though he is aware that the laws are strict and it is quite difficult to manage to integrate completely in the community. But he has hope and patience and he is sure that he will manage to “beat” the bureaucracy.