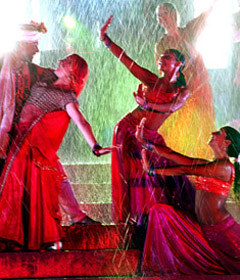 15 October 2009. It’s not just the Indians who love twirling around the floor to the thumping beats of Bollywood numbers. Even Britain’s royalty does not miss the opportunity of swaying to the pulsating beats.

Queen Elizabeth II, her husband Prince Phillip and Princess Michael of Kent were among British royals treated to some nice dance by performers from the British Asian group Nutkhut.

The 83-year-old Queen – who is said to have seen a Bollywood performance once before in the city of Bradford – congratulated the performers after the show.

The event was organised in the ornate ballroom in Buckingham Palace. It was largest of the 775 rooms and is witness to stately dinners than Bollywood shows. The function was held in advance of October-end visit of India President Pratibha Patil.

Nutkhut’s Ajay Chhabra, who jointly choreographed the 15-minute show “Bollywood Steps”, with his wife Simmy Gupta, said they felt the setting lent itself to a film set.