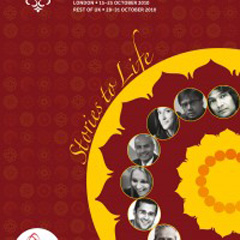 With more than 30 events confirmed at an eclectic mix of venues across the capital from 15-25 October and then at cities around the UK from 26-31 October, the DSC South Asian Literature Festival is to be Britain’s first major event celebrating the rich and varied cultures of the South Asian region, through the world of literature.

Announcing the final programme festival co-directors Jon Slack and Bhavit Mehta said: ‘The thriving literary and publishing scene in South Asia was the impetus for us bringing a literary festival devoted to South Asian writing to the UK. The sheer scale of imagination and stories connected with South Asia is truly immense, and to play a role in bringing these stories to the public is very inspiring for us. Our programme is a strong mix of high-profile literary writers and top names from politics, academia and broadcasting that people will be familiar with, but we’re also deeply committed to supporting new and emerging talent. We wanted to reflect the diverse nature of South Asian culture, exploring the politics, languages and literature of the region – we hope there will be something for everyone.’

Offering his support, prize-winning Sri Lankan born novelist Romesh Gunesekera said: ‘This promises to be an exciting new festival with imaginative programming and firm commitment. A festival very much set to continue. And continuity, these days, is something to be applauded. It is great to see the enthusiasm it has already generated and I am delighted to be part of it. I hope to see it grow and bring writing connected with all the areas of South Asia to new audiences, crossing borders and boundaries, and making the books we celebrate—wherever they begin and wherever we happen to be—part of our wider world.’

Broadcaster Nikki Bedi who will co-host the DSC Prize for South Asian Literature 2010 shortlist gala dinner at the festival, said: ‘For a number of years on the BBC Asian Network, I read at least a book a week in order to bring Asian themed literature, authors, and South Asian knowledge to a wide audience of listeners. Most of those listeners were British Asians and I see the huge potential The DSC South Asian Literature Festival has, to engage not only this community, but also a far reaching group of readers worldwide who are interested in a more varied look at lives and cultures. Children therefore will benefit hugely from a festival like this and the new writers it will promote. This first line up is extraordinarily broad and brave and I’m delighted to see

Nikesh Shukla up here alongside established novelists like Roma Tearne, who taught me more about Sri Lanka through her novels than any amount of history study could have.’

Speaking on the occasion Mrs Surina Narula, MBE said, ‘The DSC South Asian Literature Festival is a seamless extension of our vision to promote South Asian literature at the global forum. Literature emanating from this region is gaining immense readership right across the globe and this is especially true in the UK where it is followed with a keen interest. What this festival does so uniquely is that it presents the literary and cultural traditions of the South Asian region in an imaginative and interactive way, through interesting forums and reaches out to the public at large across the country.’