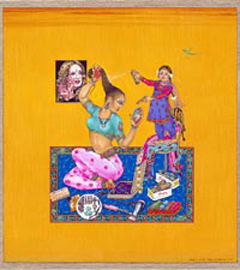 29 March 2010. The Singh twins, contemporary British artists award-winning paintings exploring  issues of social, political, religious and multicultural debate are on display at the National Portrait Gallery. The works will be displayed till June 20.

The Twin sisters, Amrit and Rabindra Singh’s, work is being displayed at the gallery for the first time. The exhibit will offer a contemporary response to the concurrent exhibition, The Indian Portrait 1560-1860. The Singh Twins have created a new gallery trail to draw links between their work and the Gallery’s permanent Collection.

Using a narrative, decorative, symbolic and witty ‘Past Modern’ (as opposed to Post Modern) style, The Singh Twins have revived the Indian miniature tradition within modern art practice. The sisters assert that their work bridges many worlds, the ancient and the modern; fusing both Western and Eastern aesthetic elements … using an ancient art form to deal with contemporary issues. Their aim is to introduce wider audiences to the beauty, richness and continuing value of our heritage within contemporary art and society.’

Twenty-seven works will be on display including Arts Matters: The Pool of Life (2008) which was commissioned by Liverpool City Council and celebrates the city’s status as European Capital of Culture in 2008; Partners in Crime: Deception and Lies (2004), featuring George W. Bush and Tony Blair following the invasion of Iraq in the aftermath of 9/11; and The Greatest (2002) depicting Muhammad Ali in the conventional style used for depicting royalty within the Mughal School of the Indian miniature tradition. Also put on show will be the award winning The Making of Liverpool, The Singh Twins’ first animated film, which combines the Indian miniature tradition with the latest digital technology to show the history and changing identity of the city.

The new Gallery trail by The Singh Twins will link their work with The Indian Portrait 1560-1860, and the Gallery’s permanent Collection. The trail will highlight how The Singh Twins are influenced by both Indian and Western portraiture in terms of themes, art practice, technique, pose and gesture, iconography and symbolism. Elaborating on the works the Singh Twins said that one of their main aims was to challenge generally accepted notions of heritage and identity. In particular, what they believe to be the generally held but false perceptions of division between east and west, modernity and tradition in art and society’.

The Singh Twins were artists in residence for the Commonwealth Games 2002 and their work has been published in nine books including Twin Perspectives, Worlds A-Part and the Oxford Encyclopedia of Women in World History.

Contemporary Connections: The Singh Twins will offer a contemporary response to the major exhibition The Indian Portrait: 1560-1860 (11 March – 20 June 2010), the first ever exhibition devoted to Indian portraiture which will include 60 outstanding portraits drawn from collections in the UK, USA and Europe. The exhibition sets out to show that Indian portraiture, an area of artistic achievement overlooked in Britain, should be seen alongside other outstanding portraits from around the world.