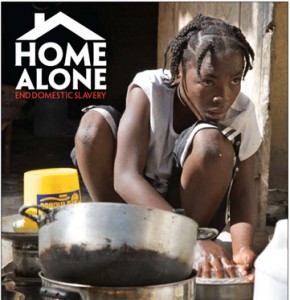 11 January 2011: “Home Alone: end domestic slavery” is an exhibition at The International Slavery Museum, Liverpool which exposes the exploitation of domestic workers on a global scale.

The powerful exhibition provides a raw insight into the illegal issues that millions of domestic workers face in their daily working lives around the globe.

From domestic cleaners, housekeepers, gardeners through to carers, the manipulation, unsuitable working conditions and abuse is under the magnifying glass in this visual display.

The free exhibition documents the everyday lives, trauma and incidents that domestic workers suffer. Through strong imagery the exhibition aims to promote domestic worker’s legal rights and raise awareness and further understanding of the existing slavery within this domain.

It is the first exhibition at The International Slavery Museum in their Campaign Zone which aims to highlight the modern forms of international slavery that exist in today’s society.

If the convention is adopted, it will contribute towards eliminating child slavery, trafficking, forced labour and abuse of domestic workers.

For further information and to join the Home Alone Campaign, please log on to www.liverpoolmuseums.org.uk.