The last two weeks of April a two-hour short film set will be shown in several Polish cities and around Europe.

The UK appointment with Polish short films will be on Friday, April 24th.

The most important part of the Festival is t 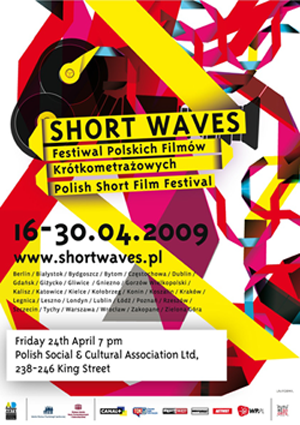 he film competition. The judges are not film critics or filmmakers: it’s the audience who votes for the best film in each of the screening sites.

The winner will be awarded with the Grand Prix Award and a money prize.

The voters will have a chance to win a two-person trip to a Secret Cinema screening in London and other prizes worth 2000 euro all together.

Additionally, a jury comprised of the organizers of the International Short Film Festival Future Shorts will choose one film to be included in the Future Shorts programme and to be shown worldwide.

Short Waves is for those seeking inspiration and willing to break the everyday routine; for those who think there’s more to cinema than an innocent smile or Hollywood-style emotion.

Tickets available at POSK before the show, price: £5.