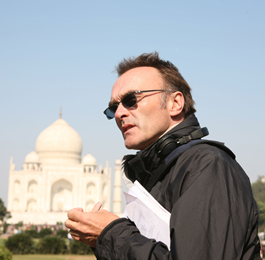 10 June 2009: Oscar-winning director-cum-British filmmaker and producer Danny Boyle feels in “London, everything is in a sense hidden away, while in Mumbai it’s just all there in the open – all the emotion, all the characters”.

No wonder, Boyle is reassembling his ‘Slumdog Millionaire’ team to make a new film on Mumbai.

His scriptwriter Simon Beaufoy, who bagged an Academy Award for Slumdog’s screenplay, says Boyle has bought the rights for another book about India’s commercial capital called "Maximum City: Bombay Lost and Found", written by Suketu Mehta.

"It was only decided a couple of weeks ago, but I will be writing the script for Danny," he says.

"Maximum City is a non-fiction work, so it will be a huge challenge to find the story in it. It is a wonderful book and I used it in my initial research for Slumdog. There are some great characters in the book, but no stories, so my job will be to get the fictional out of a non-fictional story." The book is part travelogue, part memoir and gives a colourful overview of Mumbai’s history and people.

Beaufoy asserts he is discussing the need for huge creative license in adapting the book for the big screen.

"Suketu is very understanding about my creative input and flexible about many changes. I will have to come up with something to bring together all the characters from the book into something that can make a film," he says.

Beaufoy insists that the real star of the film would be Mumbai itself. "It’s such a vibrant, young city," he adds.

Boyle was born on 20 October 1956 in Radcliffe, historically a part of Lancashire, into a working-class Irish Catholic family. His was a very strict, Catholic family and he was “an altar boy” for eight years. Boyle, rather, was supposed to be a priest. In fact, it was my mother’s fondest wish that he would become one.

During an interview with The Times, he said: “I was meant to be a priest until I was 14, I was going to transfer to a seminary near Wigan. But this priest, Father Conway, took me aside and said, ‘I don’t think you should go’. Whether he was saving me from the priesthood or the priesthood from me, I don’t know. But quite soon after, I started doing drama….”

Slumdog stars to shine on the House of Commons