Admire and enjoy South African flora
27th October 2010: A small corner of South Africa brought to the heart of London by Royal Botanic Gardens, Kew, and the British Museum, is on till 10th October 2010. Hurry up, folks!

The South Africa Landscape opened on 29th April 2010 on the Museum’s west. 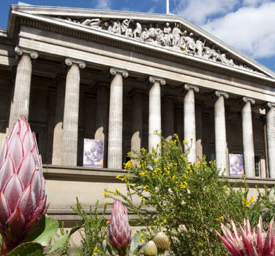 The South Africa Landscape, supported by Barclays, highlights the rich diversity of plant life in South Africa – a country that is home to three internationally renowned biodiversity hotspots.

The South Africa Landscape has a radically different appearance from the two previous habitats; taking in the Western Cape’s famous fynbos, succulent Karoo vegetation and the coastal flora of the Eastern Cape.

It features plants that are hardy from mid April to October, with a significant proportion in bloom throughout the duration of the Landscape.

The layout is a walk-through landscape with a desert feel of tumbled rocks, scree and sand; interspersed with strangely shaped quiver trees (Aloe dichotoma), swathes of spectacular plant colour and an understorey of desert annual and perennial plants.

For the British Museum the Landscape is part of a wider programme of engagement with Africa whose material culture is so important in the context of the Museum’s collections.