Producer Ewa Becla brings the latest production of the Toronto Polish Theatre on stage in London at POSK. 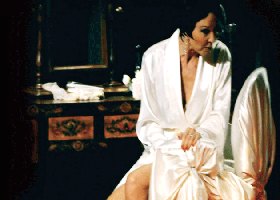 “The tales of Pola Negri” is a fascinating rags-to-riches play about the career of the Polish-born Hollywood star of the silent movies era of the 1920s-1930s, Pola Negri (a.k.a. Apolonia Chalupiec).

The latest production of the Toronto Polish Theatre, brought to the UK by Polish artist and singer Ewa Becla’s “Ewa Presents”, will be on stage in London the 18th and 19th of April at POSK in Hammersmith.

Kazimierz Braun’s play is based on the life of the famous film star. The story takes place in Pola Negri’s dressing room in Hollywood, when she comes back from Europe in 1940.

In the stream of retrospect, the Diva recalls her great career full of adventures, as well as her great love affairs with Charlie Chaplin and Rudolf Valentino. The performance is enriched with scenes from her films.

Producer Ewa Becla, a unique woman and an artist herself, is the mastermind behind most events that take place at the POSK theatre in Hammersmith.

Through her production company, Ewa Presents, she promotes Polish artists and culture in the UK, inviting Polish artists to London to perform in concerts, shows and theatre.