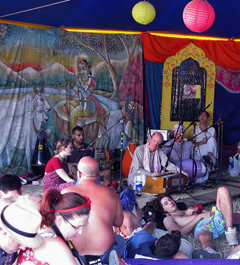 The famed Glastonbury Festival in England will have a Krishna Tent. The fiesta is considered largest Greenfield music and performing arts festival in the world. It is scheduled to be held from June 22-26.

The Krishnas offer food and some simple welfare. They are situated in Holts camping field, near Oxylers Bridge, the organisers say.

Some other Hindu groups will also be at the Healing Fields “to offer a safe space”.

American pop star Beyonce Knowles is one of the confirmed headline acts for this year’s festival and she will reportedly perform at its Pyramid Stage on the last day of the event. Other line-up is yet to be announced. Last year Stevie Wonder, Kylie Minogue, and Gorillaz performed.

Hindu statesman Rajan Zed, in a statement in Nevada (USA), applauded the festival and Krishna tent organizers for the provision of sacred space in the festival, where one could revel in Lord Krishna’s chants. Availability of pure food and other services at the tent were also a wonderful gesture by Krishna devotees, he said.

Zed, who is President of Universal Society of Hinduism, said as Lord Krishna told in Bhagavad-Gita asserted —I am the beginning, the middle and the end of all beings—so listening to Krishna’s devotional songs could prove very fulfilling.

Festival will be held at a 1,100-acre site at Worthy Farm on the edge of Pilton village, about six miles east of Glastonbury in South West England. It’s a hilly dairy farm with rough tracks. First Festival was held on September 19, 1970. Spread over a two day period, it was attended by about 1,500.

“It’s like going to another country, a hip and thrilling Brigadoon… you enter a huge tented city, a mini-state under canvas. British law still applies, but the rules of society are a bit different, a little bit freer. Everyone is here to have a wild time in their own way”, Festival website says.

Organized by local farmer Michael Eavis and his daughter Emily Eavis, Festival is mainly run by volunteers. The festival reportedly has 137,500 public tickets and a site capacity of 177,500.