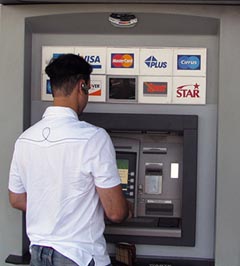 For reaching the stunning conclusion, health experts took swabs from the numeric keypads of ATMs around Britain used by thousands of shoppers daily.

They subsequently took similar swabs from nearby public toilets seats for comparing the bacteria under microscopes in a laboratory.

After the swabs were allowed to grow overnight, the samples from both the locations were tested. The worst apprehensions came true when the samples were found to contain “pseudomonads and bacillus “- bacteria known to cause sickness and diarrhoea, according to the Daily Mail.

Microbiologist for BioCote, a company manufacturing anti-bacterial products, Richard Hastings, said they were interested in comparing the levels of bacterial contamination between heavily-used ATM machines and public toilets; and were surprise by the results as the ATMs were found to be heavily contaminated with bacteria, to the same level as nearby public toilets."

The survey was carried as Britons consider public toilets to be the biggest health risk.

The survey also found almost a quarter of people dubbed public telephones as very dirty. In fact, more than one in 10 were wiping the handset and buttons down before using public telephones.

As many as 48 per cent – comprising 23 millions adults – rather avoided using the public telephones altogether unless they had to as they were concerned about picking up dirt or bugs from it.

Bus stops came third in the line, even as dusty and grimy atmosphere in London Underground and metro stations was ranked fourth.