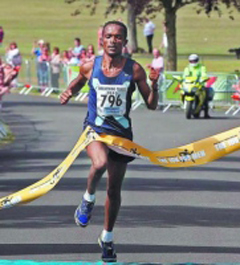 But very few knew the knew the story of struggle behind the achievement; and what success means to 26-year-old Nagash from Thornliebank, who wants to represent Scotland at the 2014 Commonwealth Games.

Nagash had taken flight from his house in Eritrea, which has poor human rights record and is ruined with internal fighting, during a military call up. He exhausted good seven months walking across Sudan. Another two months met the same fate crossing Libya. He then spent half a year in Italy as a homeless wanderer, before eventually seeking asylum in Scotland early this year. He currently lives in Glasgow.

Soon after tasting success in the run by cutting one minute and three seconds off the former record, Nagash said he was hoping his application to stay would be granted so he could represent Scotland in the games in his adopted city. More than 3,300 men participated in the race, the highest number of entrants so far.

Nagash asserted he was happy to be in Scotland and wanted to stay here, as it was his dream to represent Scotland at the Commonwealth Games.

The unbeaten run to victory was Nagash’s first competitive race in Scotland; he started running here after joining the Bellahouston Harriers three months ago.

Applauding his efforts, team manager for the Bellahouston Harriers Iain Burke described it as a tremendous achievement and a sign of great things to come. He said the man could run the marathon for Scotland in just a few years time. Burke said they have already taken up the issue with his lawyer and told him Robel was world-class standard.