‘England gave me a chance in life’, says the Romanian-born photographer.

20 April 2010. Radu Brebene came to England 4 years ago wishing to make money and then to go back to Romania. He was lucky to land a job from the moment he arrived in London as an assistant photographer for Hugo Bernard, the Queen’s photographer.

In England, the 27 years photographer he feels like home. England gave him a chance in life, a chance that, unfortunately, was not given by his home country. Despite this, he has never forgotten where he came from, Romania, where he was a car painter.

Here is his interview, published in Ziarul Romanesc, the free press weekly for Romanians in Great Britain. 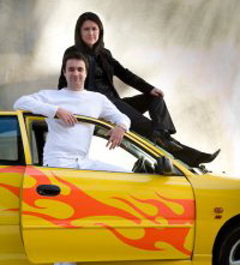 Radu, many of the Romanians say that they came in England because life at home was very difficult. Did you have the same reasons to come in here? Why England?

I don’t think my reasons were different from the others who came to England. I came here 4 years ago wishing to make money. It could be any other country. I wanted to go back to Romania quickly but things didn’t work out as planned.

My girlfriend, currently my wife, was working already in here as an au pair and she managed to get a job for me at the same family where she was working so i became an assistant photographer. It was my opportunity, i have to admit it. From working with cars (at home i was a car painter) to photography is a long way, but because i wanted so much a chance to go out of Romania i really wanted to try it. And it was a good decision.

The family my girlfriend was working for send me an invitation but first time when I applied for visa I was rejected. I was very disappointed especially because they had no concrete reason to reject me. A week after I was rejected I applied again for visa, I remember even now, it was 6th of February, my birthday and my wife’s, I went to the embassy without shaving, dressed in jeans, unlike the previous time when I was wearing a costume. I really didn’t think I will succeed, I lost hopes, but I was lucky. Maybe that is why I love so much England.

How was the meeting with England? Did you settle in quickly?

It was my first time flying. I was pretty scared and decided to have a drink: big mistake. Alcohol combined with high altitude sickness and turbulences did not have a good effect on me (laughing). I arrived to London, saw my girlfriend and before I could put myself together properly I had to start work, delivering photographs for the father of the children Relly (my wife) was taking care of. His name is Hugo Bernard, has 4 children and he is the Queen’s photographer.

Everybody treated us as a family member from the first moment we met.

My first day of work was terrible. Hugo put a map in my hand, gave me a bicycle and told me that I have the whole day at my disposal to deliver an order and to come back. You can imagine that I got lost, I was going on the wrong side of the road but around lunch time I managed to get back and I was very proud of me. With time I made myself indispensable and I received more and more responsibilities. Now I have the chance to travel and to go to parties attended by celebrities like Prince Charles, Duchess of Cornwall, Rod Stewart or very reach people as I would never expected.

Many believe that the British people put labels. Is it true? What about Romanians?

In England our “labelling” comes from the simple fact that we are from south Europe, we are “in the same pot” with Polish and Czech people, which is not necessarily a bad thing. Any English person will tell you, if asked, that we are hard workers and we accept low wages, but even so we are not their equals and I think that we will never be. Yes, Romanian people are labelling also. We feel this every time we go back to Romania. We are seen as a “filled wallet” by our “friends”. Perhaps because of this I have very few real friends back home. Unfortunately they all believe that if you are working abroad you have a lot of money and, by consequence you have to “pay the bill”, as we are saying.

Are you feeling ‘foreigner’ here?

In the UK I feel better than home, I have true friends, access to novel events. I miss Romania just because my family is in there. But i am happy because they can come to visit whenever their schedule allows them.

What you love most in London?

I love the fact that you can be exactly who you are without feeling ashamed. On top of this you can become someone without bribes and high placed contacts. It is not like home from this point of view.

Any memory connected to coming to England?

I went through many things since my arrival to UK, either I made my boss angry, Hugo, to the point that he went for a one hour walk around the block and all this because of a difference of opinion regarding a photo shooting, either I got intoxicated with chicken meat bought from a well known place in Portobello Road. I have plenty of memories, even the one less pleasant have their own charm and they are part of my life.

Do you consider yourself an accomplished person?

Yes, I think yes. I have an interesting job, I work with wonderful people, I have an understanding wife… I don’t lack in dreams, my personal website is one of my accomplished dreams (www.raduphotography.com ) and I still want lots of things. But I think I made a very important step by becoming, at only 27, from a car painter a photographer. England gave this chance, unfortunately not my country.