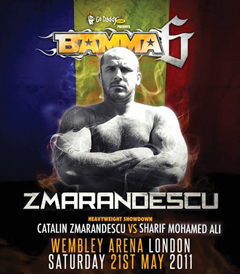 Announced as a win by ‘Front Choke’, Zmarandescu moves to 6-2 in his career, while Ali drops to 1-2.

Watch the fight (he’s the second fighter to enter the ring):

Catalin Zmarandescu, born in Bucarest, Romania, 38 years ago, has been doing sports since he was 7. He started with rugby, then did wrestling, martial arts, box etc.

• World vice-champion and European in wushu


For personal reasons he moved now to the UK, has a contract with a English club – Ultimate Fitness Centre – and has decided to become the top fighter in MMA (Mix Martial Arts). His head coach and one of the owners of the club is the famous Eddi Kone, black belt and instructor of Brazilian Jiu Jitsu (BJJ).

What is the difference between K-1 and MMA?

“MMA combines different styles of fighting: Thai box, kick box, jiu jitsu etc. In short, full-blown battle. Of course there is a regulation difference, for example in K-1 you are not allowed to hit the other while he is on the ground or to hit some parts of the body. In MMA you have more freedom, they put the fighters in a cage, close the cage and you fight as you know best.

In MMA galas are 3 rounds, of 5 minutes each and with one minute break. When there is a gala for title there are 5 rounds of 5 minutes each. At the Wembley Arena I will fight 3 rounds and if I win there will be ARABGED a fight for the world title on heavy weight category."

What is your workout daily schedule?

I train at least 6 hours a day (with 4 personal coaches) divided into 3 halves: fitness, tactic, fighting technique, coordination, kick boxing, Thai boxing etc, depending on the strict schedule done by my main coach, Eddie Kone. I work out till I am exhausted. I want to lose a few more kg so that I will get to the weight I feel comfortable with to fight.

Catalin is in London since September 2010 and he adapted really well and quickly to the English life style. He chose to train abroad because, he says, "In Romania there are not enough Martial arts coaches and the existing ones have big egos".

Making up his mind to leave Romania was not easy because it meant to spend less time with his 2 children, one boy and one girl, 7 and 9. Till recently he was staying 3 weeks in UK and another 3 in Romania, so that he could spend some time with them also.

I asked him if what he is doing is doing for money and his answer was that the main reason for him to start fighting again, after quite a long break, is his two children. They are the reason he goes on, trying to get over the problems he had in 2010 in Romania. He is planning to bring them in UK and not because he is selfish, wanting to have them close, but because of the opportunities this country offers for each individual.

One of his biggest dreams is to open a fitness and coaching centre for Romanian kids in London.

Do you want Romanian supporters to come on the 21st of May at Wembley Arena to support you?

“Yes, I would be very happy for this to happen. Each time I fight it helps a lot to hear the supporters call my name, especially when I am on the ground or I feel like I have no strength anymore. Hearing my name gives me outside power, new energies, makes me get up and start fighting with even more determination.

"I wish there will be a lot of supporters at the stadium. I know for sure that there are people coming from Romania to be near me on Saturday, because this gala is a new chapter in my life. If I win I will have the chance to fight for the world heavy weight title and it will also open doors for me: the American MMA organisations, the biggest in the world, are keeping an eye on BAMMA`s gal – my dream is to fight again in America. 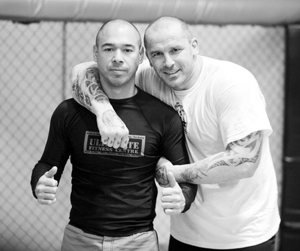 Eddie Kone, friend and main coach for Catalin Zmarandescu, agreed to tell us a few words about BAMMA, Romania and Catalin.

BAMMA – British Association of Mix Martial Arts – is one of the biggest organisations of martial arts from Europe. It was founded by a group of millionaires, 2 years ago, in Japan and because it was very successful there, they extended it to Europe.

The gala on 21 May is the sixth one organised in UK.

“It is not easy to be accepted by BAMMA but Catalin made it thanks to his records. Not anybody can fight in these galas”, said Eddie Kone, who started to visit Romania 6 years ago. He likes the country and the people living therw. Every time he was in Romania he was training with Catalin Zmarandescu and that’s how they became friends.

I was impressed how well he spoke, firstly of Romania and second of Catalin. First of all he did not accept for me to say “if Catalin wins". He corrected me, "Catalin will win, is how to say it or, after he wins”.

“I am the head coach for Catalin, I put the strategy together, but at the same time I am his friend. Catalin is very big; Romanians and English cannot imagine how great Catalin is. Following this event Catalin is going to shut the people up. It is a chance sent to him by God to do what he should have done years ago, but he did not have the right people around him.

"You have to come to this gala and see the best of Catalin in years! The real Catalin! Catalin is fantastic and please do not forget that he represents Romania. He is going to have the Romanian flag on his shoulders, even if he represents an English club. Everything he does, he does for Romania and Romanians who love him. I would have been very upset if things would have happened in a different way”

What are the chances for him to win?


"He has really high chances to win and HE WIL WIN! Because Catalin is very talented. He has strength, tactic, skills and he has 4 of the best coaches. The only thing he still needs is the support from Romanians: you have to come and support him, do not forget: he fights for Romania”.