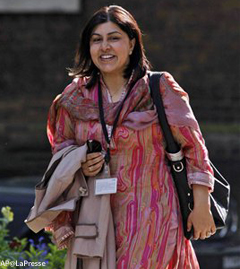 The new Conservative Party Prime Minister David Cameron has also named the 39-year old Baroness as Conservative Party chairwomen. A British lawyer and politician, Warsi is, in fact, the first woman of Pakistani origin to hold a UK cabinet position.

Warsi has been involved in politics since her college days; and believes her appointment should send a message to other young Muslims.

Elaborating, Warsi said it sends an important message to young British Muslims that this is home, this is their country, where they have rights and responsibilities. Describing it as a big moment, she said all along there has been discussion about the conflict between Islam and Britain, but she has always insisted the two can sit completely comfortably together.

Supporting Cameron’s stand on immigration, Warsi said it was absolutely right that they kept to their red line on the cap on immigration. Appreciating the Lib-Dem, she said support from them was a good move, away from their amnesty.

Quoting her own example, Warsi said half a century ago Britain was in need for workers to come and work in the mills. People like her father, his family and friends answered that call. They made a better life for themselves and also rebuilt Britain’s economy.

But now Britain has to assess what she needs. As of now, there’s no need, as the country has five million people on out-of-work benefits.

But it hasn’t been a cake walk for her. The gay rights organization, Stonewall, and several Labour politicians, questioned her suitability for a high-profile Conservative party role owing to leaflets issued during her 2005 election campaign. These allegedly contained views which they claimed were homophobic.

Some of her 2005 campaign leaflets claimed Labour’s lowering of homosexual age of consent from 18 to 16 under the Sexual Offences (Amendment) Act 2000 was "allowing schoolchildren to be propositioned for homosexual relationships; and that homosexuality was being peddled to children as young as seven in schools.