11th February 2011: First-time children’s book author of Indian descent has captured laurels and the prestigious 5,000-pound Waterstones Children’s Book Prize, for a story on the death of a grandparent. 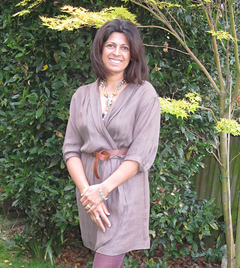 A mother-of-three from north London, Sita Brahmachari won the prize for ‘Artichoke Hearts’, — a tribute to ‘totally funky grandma’. She beat eight short listed titles, including Rebecca Stead’s Newbery award-winner `When You Reach Me’ and Candy Gourlay’s `Tall Story’, to win the award.

Her debut novel is all about a teenager trying to come to terms with life, death and first love. It is the story of a girl’s relationship with her under-the-weather grandmother. Appreciating the book for "tackling the issue of death head-on", the judges also praised it for its constructive depiction of the relationship between grandparents and grandchildren.

Brahmachari’s mother-in-law is privileged in the book as Nana Josie. She is the 12-year-old Mira Levenson’s much-loved grandmother, who is dying of cancer.

Besides coping up with her sense of grief and loss for Nana Josie, the youngling is also trying to deal with usual early teenage problems, including new feelings for a strange boy Jidhe Jackson.

Announcing Brahmachari’s win, children’s laureate Anthony Browne dubbed Artichoke Hearts as a beautifully written book about family, friendship, grief and hope, which made me laugh and cry – sometimes at the same time.

Brahmachari, while going into the background and the circumstances around the writing of the book, says she had first met her mother-in-law at the tender age of 18. When she died five years ago, she, along with her family, her husband, and three children missed her a great deal.

Describing her as a totally funky grandma, the author says she wanted to write about her as she thought sometimes people look at old people and all they see is their age. She wanted to go beyond that to show what a great character her mother-in-law was and what a wonderful life she lived. She taught all of them in the brave way she faced her own death.