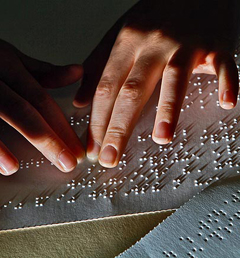 30th August 2010: After moving to Britain in hope of finding a cure for her blindness, a Polish teenager has made it big. She is celebrating success in the General Certificate of Secondary Education (GCSE).

It is an academic qualification awarded in a specified subject, generally taken in a number of subjects by students aged 14–16 in secondary education in England, Wales, Gibraltar and Northern Ireland

Klaudia Suchowak’s academic achievements are being seen as extraordinary as she began studying at Newcastle’s St John Fisher Catholic College only in January. St John Fisher uses an embossing machine to convert worksheets, notes and homework into Braille.

Putting up in Cross Heath, the 16-year-old says she is very glad with results. She hopes to do more GCSEs next year."
She receives support from specialists at Staffordshire County Council and a learning support assistant. The school too has ensured extra tuition in English.