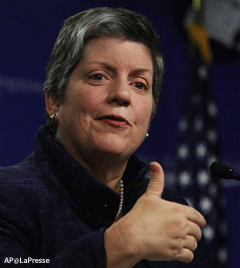 14 November 2009. Negative growth and massive jobs loss in the United States will not deter the Obama Administration from tackling one of the most critical challenges of the century: managing the immigration system, announced Secretary of Homeland Security Janet Napolitano.

Delivering a speech at the Washington liberal think tank ‘Center for American Progress’, Ms Napolitano purported immigration reform to be central to the new foundation for growth and prosperity that the Administration is drawing to strengthen the economy, families and small businesses throughout the country.

The White House is tackling the issue of health insurance reform, planting the seeds of growth for a new, clean energy economy, making a serious, national commitment to education reform, she said.

The Administration’s next priority is to address the status quo of immigration, which Ms Napolitano describes as ‘simply unacceptable’, with some 12 million workers lurking in the shadows of legality, exploited by dishonest employers willing to flout the law in order to hire cheap labour.

This announcement comes at a time when advocates on all sides of the immigration debate had begun to doubt that President Obama would keep his electoral pledge of tackling the immigration issue in the first months of 2010.

‘Everybody recognizes that our current system isn’t working and that our immigration laws need to change. America’s businesses, workers, and faith-based organizations are calling for reform. Law enforcement and government at every level are asking for reform. And at the Department of Homeland Security, we need reform to do our job of enforcing the law and keeping our country secure,’ said Napolitano.

‘Over the past ten months, we’ve worked to improve immigration enforcement and border security within the current legal framework. But the more work we do, the more it becomes clear that the laws themselves need to be reformed,’ she added.

The reform outlined by Secretary Napolitano, ‘a three-legged stool’, is based on the key elements of fair, reliable enforcement, improved management of legal flows of families and workers, and a firm but fair way to earn legal status.

‘We need Congress to create the legal foundation for bringing the millions of illegal immigrants in this country out of the shadows, require them to register and pay all taxes they owe, and enforce the penalties that they will have to pay as part of earning legal status,’ Ms Napolitano said. ‘Let me emphasize this: we will never have fully effective law enforcement or national security as long as so many millions remain in the shadows. ‘Making sure these people become full taxpayers and pay their fair share will both benefit our economy and make it easier to enforce the laws against unscrupulous or exploitive employers.

‘A tough and fair pathway to earned legal status will mandate that illegal immigrants meet a number of requirements—including registering, paying a fine, passing a criminal background check, fully paying all taxes and learning English.

Lawmakers have been trying to tackle the illegal immigration problem since the mid-80’s, unsuccessfully. Politically, the issue is divisive; electorally, perilous.

The latest major attempt at reforming the system was made in 2007, when a bill with legalisation provisions put forth by the Bush administration failed in Congress. In that circumstance, many members of Congress said they would support immigration reform in the future, but only provided significant progress was made securing the border.

Many of the benchmarks set by Congress in 2007 have now been met, affirmed Napolitano.

Ms. Napolitano said the Obama administration had made significant strides to improve enforcement at the border, in the interior of the country and against employers hiring illegal immigrants.

The sharp reduction in the flow of illegal immigrants into the country due to improved enforcement and economic recession makes the time rife to move ahead with the legalisation program and the immigration overhaul.