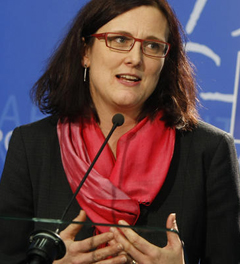 21 February, 2011 – "We will send European planes in the skies of Sicily, between Lampedusa and Tunisia, to assist Italian border guards in this emergency immigration."

This was announced by the EU Commissioner for Internal Affairs, Cecilia Malmstrom, in an interview published Sunday by the Italian newspaper ‘Corriere della Sera”, describing what is happening as "dramatic".

"Today we have sent two of our general managers to Rome to discuss with the Italian authorities. If all goes as planned, the mission will start within a few days.

"Many European states have already given their assent, beginning with Spain and France. It will be a mission by Frontex (the European agency in charge of coordinating border security), thus governed by European legislation and supported by European funding and equipment: it will provide on the one hand the deployment of experts in Lampedusa and the technical means and on the other support aircraft.

"The planes will provide surveillance by air in support of the Italian authorities which will detect any new influx of migrants as soon as it occurs and sound the alarm for naval surveillance which will in turn lead migrant boats to ‘safe ports’," the Commissioner explained.

Even for those who are already landed there may be this outcome, as Commissioner Malmstrom states that likely "the majority will be sent back, except for those who demonstrate the right to political asylum in the EU, but so far there are few who made such plea".

Asked whether the mission will facilitate the notorious push-backs at sea, the Commissioner answered, "No, rather, any requests for asylum. Push-backs are expressly prohibited by European rules. " But isn’t this mission Frontex ultimately only an emergency solution, the Commissioner was asked, "No, because later we will also commit on a long-term basis with Tunisia and other countries to offer assistance on site: investments, loans, infrastructure, trade. But they too must be encouraged to take back their citizens. "

Regarding the accusation that the Italian Interior Minister Maroni made to the EU on the emergency on Lampedusa, the European Commissioner said, "I do not know why he did it. We have offered help to Italy, and the help was rejected. Then the letter with a formal request arrived. "

Cecilia Malmstrom said she was concerned about the status of Libya, "With all its neighboring other countries, the EU has long been committed to a policy of good neighborly relations; with Libya collaboration is rather tough."

As for the uprising of North Africa, ‘I am extremely happy for the events in Egypt. And yes, I’ve seen some similarities with the collapse of the Berlin Wall. The differences? Well, in 1989 there were no Twitter or Facebook, and in the East democracies in transition were already being established. North Africa has very limited hand experience of democracy. Hence cause it will take ‘some time to understand the outcomes. "

Schifani: "Finally, EU recognizes that the problem is not just Italian" The remarks of the President of the Senate on landings from North Africa Fortunately, Europe is beginning to understand that this is a problem that does not concerns only Italy, " said the chairman of the Italian Senate, Renato Schifani.

"This is an extraordinary event," said Mr. Schifani, "the uprisings in the Maghreb are likely to lead to exodus to our shores, perhaps not biblical, but certainly very substantial. "

He added, "Europe finally fully realized this and I am confident that the approach will now be multilateral. "

To the question of repatriation announced by the European Union, Mr. Schifani said, "It is not for me to get into the dynamics of the expulsion, but I take note that after the first days of lack of a European Union approach to the problem, now Europe fully recognizes the existence of a problem that belongs to all European states and not just Italy."