While BNP barks against the evils of immigration, the Obama administration focuses on its value and management 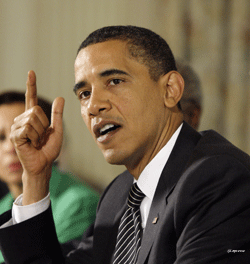 26 June 2009. As political parties like the British National Party and organizations like MigrationWatch are demanding sharp cuts in immigration levels, America seems to have a clearer approach on the issue.

President Barack Obama on Thursday made it clear his administration is committed to working with the Congress to pass a comprehensive immigration reform.

After discussing immigration with members from both political parties at the White House, President Obama said there still were differences on how to implement the changes, but all sides were in complete agreement that the “broken” current system "needs fixing."

With this, he has re-launched the immigration debate in the US and has urged the Congress not to put off immigration reforms.

The President also said any overhaul must focus on tightening borders and clarifying the status of the country’s 12 million illegal immigrants.

President Obama has reportedly got a top Cabinet official to work with Congress to speed immigration reform.

"Despite our inability to get this passed over the last several years, the American people still want to see a solution," President Obama told reporters after meeting with Democratic and Republican lawmakers.

He said he has already asked Homeland Security Secretary Janet Napolitano to be in constant and regular touch with lawmakers in an attempt to methodically work through a number of controversial issues. These included how to handle the 12 million illegal immigrants already in the United States and how to prevent illegal immigration in the future.

President Obama said the task was going to require some heavy lifting; a victory of practicality, common sense and good policymaking over short-term politics.

He said the White House and Democratic-controlled Congress need to start pushing now to pass legislation and "not put it off for a year, two years, three years, five years from now."

Congress failed in 2006 and 2007 to pass immigration reform despite a push by former Republican President George W. Bush.
His assertions apparently have in them “lessons” for all others. President Obama has all along been asserting America has nothing to fear from today’s immigrants, despite the noise and anger that too often surrounds the immigration debate.

In a speech he gave at the National Association of Latino Elected and Appointed Officials (NALEO) Conference in Washington, D.C. on June 28, 2008, the then Democratic presidential candidate Barack Obama said: “America has nothing to fear from today’s immigrants. They have come here for the same reason that families have always come here, for the same reason my father came here – for the hope that in America, they could build a better life for themselves and their families.”

President Obama has also been asserting America needs immigration reform that “will secure the borders, and punish employers who exploit immigrant labour; reform that finally brings the 12 million people who are here illegally out of the shadows by requiring them to take steps to become legal citizens. We must assert our values and reconcile our principles as a nation of immigrants and a nation of laws.”