Peter Bossman is already known as the ‘Obama of Piran’

23 October 2010. SLOVENIA. The lovely Slovenian town of Piran, blessed by natural and artistic beauty, basking on the shores of the Adriatic Sea, has elected an immigrant from Africa as its mayor late on Sunday, 24th October. 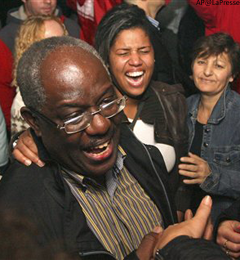 The first black mayor in a central European country, Peter Bossman, a 54-year old doctor originally from Ghana, is already known as the ‘Obama of Piran’.

Unlike Obama, whose physical beauty has certainly added to the charisma he enjoyed among some voters, Mr. Bossman is not as handsome, but possesses a warm personality that gave him ‘star’ status in his new home town.