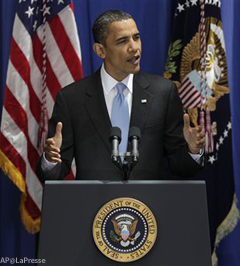 It may sound like just another case, but this time the battle is for the immigrants in the US.

The case has been filed by none else than Obama administration. That’s right. The administration has sued Arizona over the state’s strict new immigration law. The case is being seen in an apparent attempt by the administration to take back the control over the issue, even as it left the Republicans infuriated as they believe the border requires more security.

The lawsuit is part of Obama’s broader approach to cope with 10.8 million illegal immigrants believed to be in the country.

U.S. Attorney-General Eric Holder said in a statement: "Seeking to address the issue through a patchwork of state laws will only create more problems than it solves.

Already celebrities, including Seth MacFarlane, Eva Longoria, John Cusack, George Lopez, Soulja Boy, Shakira, Ricky Martin and Linda Ronstadt, have aired strong views against the law that allows the authorities to stop anyone they think may be an illegal immigrant.


The Republican-controlled Arizona legislature comes into effect from 29 July 2010 and makes it a crime to be in Arizona without immigration papers.

The bill, signed April 23, requires legal immigrants to carry their registration documents all the times, as it allows police officers to question anyone they suspect to be an illegal immigrant.

The law was purportedly passed to block the flood of thousands of illegal immigrants crossing the border from Mexico and to reduce trafficking, besides other crimes in the area.

President Barack Obama believes the law is misguided; and only recently met Arizona Governor Jan Brewer in this regard.

Religious leaders in the US and Latin America have also condemned Arizona’s contentious new immigration law.

The Obama administration argued the Arizona law was unconstitutional, as immigration was the responsibility of the federal government, not each state.

In the lawsuit filed in federal court in Arizona, the Justice Department has asked for an injunction to prevent the law from coming into force from July 29.

The Department agreed Arizona legislators had "legitimate concerns" about illegal immigration. But it asserted the U.S. Constitution gave the federal government sole authority over immigration matters.

Reacting to the developments, Arizona Governor Jan Brewer condemned the lawsuit. Describing it “a waste of taxpayer funds”, the Governor said the state law was needed because the federal government had not done its job.

Brewer claimed she has set up a legal defence fund to cover legal fees due to the federal challenge and other lawsuits.