The ‘Utah solution’ to illegal immigration challenged as unconstitutional (and praised)

22 March 2011. Utah after Arizona. Another deep red state trying to take the issue of illegal immigration in its own hands. 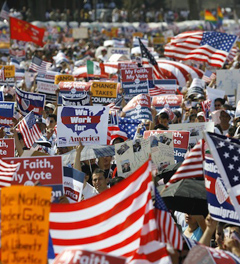 The Republican-controlled legislature of the Mormon state earlier this month passed a package of bills against illegal immigration, signed into law a week ago by Utah Governor Gary Herbert, who portrayed it as a new, progressive model, which he called on the federal government to follow.

The controversial package has been called "The Utah solution," and is a soft version of the anti-Hispanic legislation approved in Arizona in May 2010, the most restrictive legislation ever passed across the Atlantic.

The Bills aim to avoid the excesses of the Arizona bills, while recognising the need to control illegal immigration as well as the demand for unskilled labour.

Under the new laws, current, undocumented immigrants, who worked in Utah before May of this year, (and their immediate family) are allowed to obtain residency documents if they pass a background check and pay a fine of up to $2,500.

Employers may then hire them, taking advantage of a guest worker programme, based on fixed-term contracts (guest worker permits).

The law requires police to check the immigration status only of people apprehended for felonies and serious misdemeanors (not for any violation as does Arizona’s law, currently upheld by a federal judge).

The Utah laws are to come in force in 2013, but the main American immigration consultancy groups have immediately called on the federal government to take decisive action to block their implementation and lawsuits set up to challenge the measures through the judiciary.

Key provisions of the bills, notably the issuing of two-year work permits to illegal aliens and the permission for employers to hire undocumented workers, are unconstitutional and defy federal authority over the establishment of immigration policy, argued the Federation for American Immigration Reform (FAIR).

"While the administration clearly approves of the political objective of allowing illegal aliens to remain and work in the country legally," said Dan Stein, president of FAIR, "states do not have the constitutional authority to write their own immigration policies. As a matter of principle and in defense of the Constitution, the Obama administration has no choice but to file suit against Utah."

"Gov. Herbert and the Utah legislature, like most Americans, are frustrated by the federal government’s seeming inability to enact sensible immigration reforms, and its unwillingness to enforce existing ones," Mr. Stein added. "Federal statutes give states certain powers to enforce immigration laws, not to create their own immigration laws as Utah has done.

Opposition to the Bills was immediate from both ends of the political spectrum.

Tea party activists denounce the guest worker programme as an attempt to carry out what they call an amnesty programme and are angered by the position of the Mormon church that, without officially endorsing the bill, has emphasized some of its guiding principles, such as compassion for neighbours and a concern for keeping families together.

The bills are also contested by immigrant advocacy groups, mainly because they open the door to racial profiling by police and give falls hopes to illegal immigrants, while failing to provide a path to citizenship.

Hundreds rallied in Salt Lake City to ask for the laws to be repealed.

The same groups however praise the underlying principles and point to Utah as a potential model for other states and the federal government.

"It’s unprecedented that a state has come up with an idea about how to legalize illegal immigrants already living in the state," said Frank Sharry, executive director of America’s Voice, a Washington, D.C.-based group supportive of a legal status for illegal immigrants. "It’s a bold, innovative statement. The Obama administration should take notice, support the program and start a dialogue with the state."