About 263 Afghan immigrants were on board

17th January 2010: A ship carrying about  263 migrants sunk west of the island of Corfu leaving  22 passengers missing. The news was confirmed by Greek coastguards. The development has again brought to the fore 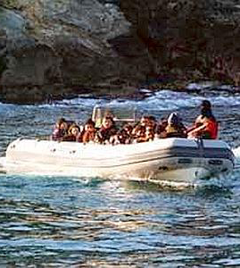 Coastguards said they were alerted by a passenger on the Hasan Reis, which was ferrying a reported 263 Afghan illegal immigrants towards Italy. High winds prevented rescue boats to act immediately and save the passengers. The ship’s captain reported he took 241 people on board and that the Italy-bound Hasan Reis sank.

Passengers cut off on the wooden boat about 30 miles off the Greek island of Corfu, were rescued by a Dutch cargo ship at about 2.30am local time, around seven hours after a distress call made late evening.

The migrants rescued were said to be all well and confirmed they were Afghans. The information was disclosed by a coastguard official who declined to be named.

The ship’s captain reported he took 241 people on board and that the Italy-bound Hasan Reis sank.

Authorities said they were waiting for the cargo ship’s imminent arrival at Corfu harbour. Searches are now being conducted by five vessels and search and rescue helicopters looking for 22 people who were missing according to statements making by those rescued. A helicopter search has found no survivors at sea, it was reported.

Greece has become the main gateway to the European Union for illegal migrants and asylum seekers. Over the past year migrants have increasingly chosen the safer land route via Turkey rather than crossing the sea on rickety boats.

An estimated half a million illegal immigrants and asylum seekers live in the Mediterranean state of about 11 million inhabitants, and an increasing share of those trying to reach the EU come in through Greece.