It will be more difficult for those on temporary visas to remain permanently in the UK 14 April 2011: Ending Britain’s benefits culture and cutting immigration are "two sides of the same coin", the Prime Minister David Cameron will say he sets out the Government’s plan to reduce the number of migrants coming to the UK. 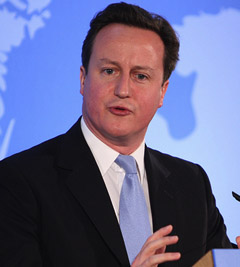 Mr Cameron will say that foreign workers could not be blamed for snapping up jobs if the country’s "woeful" benefits system meant many Britons did not need to work, but instead could live on state handouts.

The Government "would never control immigration properly if it didn’t tackle welfare dependency". Mr Cameron will add he wants to see "good immigration, not mass immigration", with tighter controls on student visas and the number skilled workers coming to the UK.

It will also be more difficult for those on temporary visas to remain permanently in the UK and there will be "transitional" limits on the number of migrants from countries joining the European Union in the future.

Mr Cameron will say that by approaching the immigration debate "sensibly and reasonably", it will be possible to starve extremist parties of the "oxygen of public anxiety".

In a move designed to take the heat out of the immigration debate, Mr Cameron will claim that although three-quarters of the 2.5 million jobs created in the British economy since 1997 had been taken by foreign workers, it was "not a case of immigrants coming over here and taking our jobs".

He will say: "The real issue is this – migrants are filling gaps in the labour market left wide open by a welfare system that for years has paid British people not to work.

"That’s where the blame lies – at the door of our woeful welfare system, and the last government who comprehensively failed to reform it. So, immigration and welfare reform are two sides of the same coin. Put simply, we will never control immigration properly unless we tackle welfare dependency.

"That’s another powerful reason why this Government is undertaking the biggest shake-up of the welfare system for generations, making sure that work will always pay and ending the option of living a life on the dole when a life in work is possible."

Reacting to Mr Cameron’s speech, shadow home secretary Yvette Cooper said: "He has made very big promises about the level of net migration he will achieve – but he hasn’t set out workable, transparent policies to deliver it. As long as his big promises hide fudged policies and figures he is not being straight with people, and he is guilty of the very same failings he accuses others of in this speech."

By The Press Association