It’s bound to leave a bad taste in the mouths of Britain’s two million Muslims, Jews and Hindus. 05 June 2009. The Food Standards Agency (FSA) believes chicken secretly injected with beef and pork waste is being sold across Britain.

As per available information, in a hi-tech fraud run by firms in three EU states, food manufacturers are making bulking agents out of porcine and bovine gristle, and bones, that help inflate chicken breasts, so they fetch a higher price. 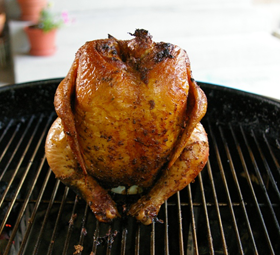 The FSA using new scientific techniques detected the swindle. Thousands of restaurateurs and cafe owners are likely to have been conned into buying chicken containing the powder, which binds water with hydrolysed pork and beef proteins into chicken breasts.

Thus diners have been unwittingly consuming traces of other animals when eating out.

Muslims, Jews and Hindus are forbidden from eating either pork or beef. Muslims would ordinarily eat “halal” chicken and Jews kosher chicken sold through approved caterers and butchers.

The Hindu Forum of Britain described news of the adulteration as "shocking and potentially very distressing." The food regulator acknowledged the serious consequences of its findings. "Use of these proteins does not make chicken products unsafe, but it is important that people are given accurate information about their food," the FSA said.

The fraud has been taking place for at least the past two years, and still continues because of inaction by the authorities in three EU states, believed to be Germany, Netherlands and Spain.

The European Commission rebuffed British demands to ban beef and pork proteins from being added to chicken, when first detected in the UK and Ireland in 2001 and 2003.

So fellows, chicken out, if you have reasons to suspect the chicken is laced.