Refugees are honest, hardworking men and women who enrich the UK 12 May 2011: UK’s Government is keen on sorting out inefficiency in the asylum system, ending unfair practices and acting internationally to help as many refugees as possible, Deputy Prime Minister Nick Clegg has said. 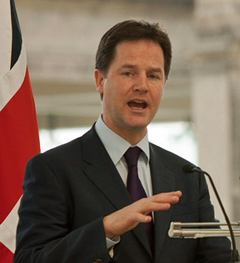 In a speech to mark to mark the 60th anniversary the formation of the Refugee Council in the UK and the United Nations Convention Relating to the Status of Refugees, Mr. Clegg said that the UN Convention on Refugees marked a turning point in the international community’s attitude towards the plight of displaced peoples.

Reflecting on the 60 years since the formation of the Refugee Council, the Deputy PM said that thanks to the work of such organisations millions of lives have been saved.

Mr. Clegg said they inherited an asylum “system in chaos”, with “innocent children behind bars. Asylum seekers sent back to countries where they would have to hide their sexuality to avoid the risk of harm. Many individuals seeking asylum lost in limbo, with no decision over their application for five, seven, ten years; many of them forced into the shadows; part of a forgotten underclass.”

He criticized those who have been painting refugees and immigrants as a threat to the UK. “Of course, Britain, like all countries, has a duty to examine asylum claims and refuse those which are not justified. But you know better than anyone that the refugees who get through all the checks and are granted refugee status are invariably honest, hardworking men and women who go on to contribute to their communities and enrich our national tapestry.”

Mr. Clegg said that UK’s openness to the contributions of refugees “and to those in need of our help” is what “makes us British.”

“We must not surrender the meaning of Britishness to bigots, xenophobes, organisations like the BNP. Liberals, progressives, true patriots must reclaim this ground,” he said.

Mr. Clegg said that through the UK Gateway protection programme the UK is providing a safe route to some of the world’s most vulnerable refugees.

He reaffirmed the Coalition Government’s commitment to do everything possible to make sure refugees get the help they need.

Mr. Clegg said that they have never “shied away from taking the right stance on asylum, even when it has been controversial to do so.”

He recalled that in 2006, the then Home Secretary John Reid admitted that 450,000 historic asylum cases had not been dealt with. Some of the cases dated back to the 1990s. “Behind that statistic lies real people. Some of whom will have travelled huge distances, after suffering unimaginable traumas, only to then be subjected to years of uncertainty, hardship, fear. That’s not right. And it costs money; that inefficiency prevents us from targeting limited resources to the people who need it most.”

Mr. Clegg said that the Government was looking for ways to “improve decision-making: better decisions, made first time, and made faster.”

Praising the speed with which asylum cases are now handled, Mr. Clegg said over half of applications are decided on within a month, with very few going beyond six months. He, however, said there was need of doing more to speed up the processing of applications.

The Deputy prime minister said the asylum system needed to be both fair and faster, and to ensure the legitimate needs of those seeking refuge in the UK are upheld to the highest standards, at all times.

He praised the Coalition Government for abolishing detention of children for immigration purposes. Between 2005 and May 2010, some 7,000 children were locked up for immigration purposes. “Children – some of whom will have travelled from war torn, devastated nations – literally taken from their homes, without warning, and placed behind bars. Sometimes for weeks, sometimes for months, in one case for 190 days; something no innocent child should ever have to endure.”

Including women in the asylum system as one of the categories of people in need of better protection, Mr. Clegg wondered why far more women have their case overturned at appeal. “Is there an inherent unfairness built into the system?” he asked. “That is something we are looking at very carefully; and we’re ensuring the process is sensitive to the needs of women and girls.”

The UK, Mr. Clegg said, “should be aiming for nothing less than the most compassionate, efficient, dignified asylum system in the world. That cannot happen until we’re sure no single group is being singled out.”

Apart from helping refugees in different parts of the world through aid, it is important for the UK to “take a stand against those regimes that pose a threat to peace; who ride roughshod over the liberty of their people,” Mr. Clegg said.

The Deputy prime minister concluded by saying that no one should ever be forced from their home. “But when it happens they must know that nations like ours will provide the safety and security all people deserve. That’s a promise we made 60 years ago. It is important today as it was then.”