Says answer to immigration is not a cap 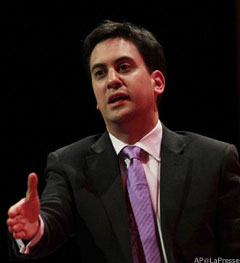 29th September 2010: In his debut address as head of the opposition Labour Party, Ed Miliband said the party was wrong on mass immigration. But, Miliband said his answer to immigration was not a cap, but less flexible labour markets and stronger workers’ rights.

Son of immigrants who escaped the Nazis, Miliband said: “Without batting an eyelid, I am quite happy to trash much of Labour’s record. The party was wrong on the Iraq war, bank regulation, mass immigration, civil liberties, and tuition fees.

“I shall lightly brush over the fact that I was part of the government that made these mistakes. And I may be a Gordon Brown protégé, but he was wrong to claim that he had ended boom and bust….

“Now, I might have won the leadership election on the back of union votes but I want to tackle the idea that I am in their pocket. So, brothers, you must be responsible. There must be no irresponsible strikes in the face of cuts. That would alienate the public against us. I won’t support irresponsible strikes.

“But don’t worry, I haven’t gone all Tory on you. I still support a living wage, I want to tax the banks more, and my answer to immigration is not a cap but less flexible labour markets and stronger workers’ rights.