Have been accused of attacking Babar Ahmad at house, on way to police station


5th May 2011: Four Metropolitan Police officers, accused of a sustained and violent attack on a terror suspect, are in dock  The four have gone on trial and have been accused of attacking Babar Ahmad at home and on journey to Charing Cross police station. 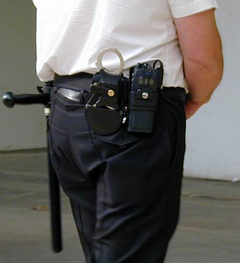 On 2nd December 2003, Ahmad was taken in custody during a dawn raid on his house in Fountain Road, Tooting, south London. Southwark Crown Court heard the officers kicked and punched the suspect and stamped on his feet.

Ahmad was released without charge six days later, but is in custody awaiting extradition to the US for alleged terrorism offences. He has been fighting the decision since 2004.

Jonathan Laidlaw QC, prosecuting, told the jury that the officers allegedly forced Ahmad into a praying position in his prayer room. One of them asked shouted: "Where is your God now?"

The officers were told prior to the raid that Ahmad had received terrorist training. He had also fought overseas in support of jihad. They were apprehending that the suspect would resist the arrest. But, the reality was quite different.

The court was told Ahmad did not resist to arrest, after police in helmets and protective clothing found their way into Ahmad’s house.

Clad in pyjamas and barefooted, Ahmad simply raised his arms above his head in an attempt to indicate he was not going to offer resistance.

But unwilling to take chances, the police Territorial Support Group began to shout and swear at Ahmad. He was punched and beaten to the floor

Laidlaw said the officers continued to act violently even after Ahmad’s hands were handcuffed behind his back, while he driven to the police station in a van.

The assault continued during the journey.