2nd June 2011: Help for the victims of human trafficking is just a phone call away. 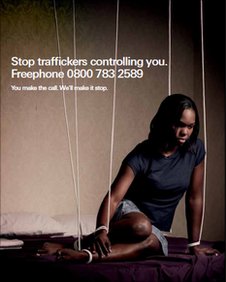 A new phone-line for victims of human trafficking has been launched today by the Metropolitan Police Service.

The free-phone number 0800 783 2589 asks victims and those who suspect trafficked victims are living in their community, to pass on information in confidence to the police.

The phone line will be staffed by officers between 9am and 5pm Monday to Friday. At all other times messages can be left for officers. In an emergency, people should call 999.

Experienced officers will investigate their cases and take action against the perpetrators where possible.

The Metropolitan Police Service said where this is not possible, appropriate care and advice to victims will be provided in conjunction with their partners.

The free-phone number is featured in a poster campaign produced for the MPS and the charity `Stop the Traffik’.

The posters encourage men and women who have been trafficked into the UK and forced to work for little or no wages in the sex and domestic industries, amongst others, to report the crimes to police.

They show women attached like puppets on strings in a dark and dingy room and carry the strap line: ‘Stop traffickers controlling you. You make the call. We’ll make it stop’.

The posters are being distributed over the coming weeks by police and partners, including charities, NGOs and other support and outreach groups, in a range of public places such as libraries, doctors’ surgeries and police stations.

Detective Chief Superintendent Richard Martin, head of the MPS’s SCD9 Human Exploitation and Organised Crime Command, which investigates allegations of trafficking and domestic servitude, said: "I hope that this poster and the free-phone number it shows will encourage and enable victims who are suffering at the hands of traffickers to get in touch with us.

"Since SCD9 was formed in April last year, we have been working to raise awareness and understanding of all aspects of Human Trafficking, including trafficking for sexual exploitation and trafficking in the context of domestic servitude and forced labour.
"Numerous human trafficking investigations are currently under way, and officers have also secured 12 convictions in the last year, with a further 20 defendants awaiting trial.

"We work closely with partner organisations and want to build on this work by providing this new free-phone support number.

"I would also ask that anybody who suspects trafficked victims are being forced to work within their community to contact us to pass on information in confidence on 0800 783 2589. If it’s an emergency, people should call 999."

"This poster and helpline are essential to achieving this, and Stop the Traffik is proud to be working with advertising agency Leagas Delaney and the Metropolitan Police on this project."