Laws effective at rounding up migrant sex workers, rather than supporting victims

10th December 2010: To protect the human rights of migrants against exploitation in the UK — sexual or otherwise, the UK must sign and ratify the Convention on the Protection of the Rights of All Migrant Workers and Members of their Families, a report has recommended. 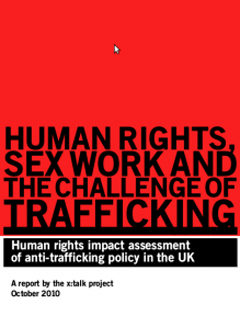 The report Human Rights, Sex Work and The Challenge of Trafficking by `x:talk project’ says: `The evidence and research gathered in this project demonstrate that for the human rights of sex workers to be protected and for instances of trafficking to be dealt with in an effective and appropriate manner, the cooption of anti-trafficking discourse in the service of both an abolitionist approach to sex work and an anti-immigration agenda has to end.

`Instead there needs to be a shift at the policy, legal and administrative levels to reflect an understanding that the women, men and transgender people engaged in commercial sexual services are engaged in a labour process.

`From this labour framework, it is then possible to identify instances of forced labour and poor working conditions and enact appropriate remedies and responses while at the same time protecting the rights of sex workers and migrants.

Quoting the report, Joint Council for the Welfare of Immigrants says: While no one would want to underplay the gross human rights violation that trafficking amounts to, the x:talk report argues that laws and measures introduced to address trafficking have been more effective at rounding up migrant sex workers and charging them with prostitution and immigration crimes than supporting and assisting genuine victims of trafficking.

`Take, for example, Pentameter 2, a joint policing and UKBA operation aimed at ‘rescuing’ victims of trafficking. This series of raids on 822 indoor sex venues across the UK resulted in the conviction of just 15 people on trafficking charges, in contrast to the 122 people who were arrested for immigration offences during the operation.

`Human trafficking has been framed in the UK in terms of a sexual offence whose victims are women, and with little distinction made between trafficking and prostitution per se. The x:talk report expresses concern that this policy focus has the effect of creating a moral panic around women working in the sex industry. And that is particularly the case for migrant women, who have become the target of immigration round-ups and, as a result, have been pushed into more underground, less safe pockets of the industry.

Irregular immigration status has also been a major mechanism of blackmail and control by people who do seek to exploit or control these women.

`The report also argues that anti-trafficking efforts are failing to recognise or address the needs of men and transgender people who are trafficked, as well as people trafficked into non-sexual work. Between 2003 and December 2008, a total of 92 people were convicted of sex trafficking, compared with four convictions for labour trafficking.

`In terms of protecting the human rights of trafficked people, the UK offers no national coordinated framework for providing services to victims of trafficking. As recently as August this year, the SOCA website defined trafficking as: “the movement of illegal immigrants for exploitation within the UK,” which it isn’t—trafficking does not always involve cross-border migration or breaches of migration law, yet it would appear it has been adopted by the UK authorities as yet another front in the protection of UK border integrity.

The report calls upon the Government to rethink its trafficking policy. It recommends that to protect the human rights of migrants against exploitation in the UK (sexual or otherwise), the UK must sign and ratify the Convention on the Protection of the Rights of All Migrant Workers and Members of their Families and that, in general, a migrant’s immigration status cannot be invoked to undermine their human rights’.