Warns plans to place the cap will damage the economy 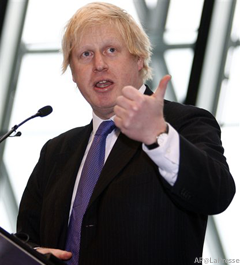 10th September 2010: Just about a fortnight after the new government’s move to place a cap on the number of immigrants came under fire from Britain’s former foreign secretary David Miliband, Boris Johnson has joined in.

Calling for a ‘major rethink of government policy’, the London Mayor has warned that plans to place the cap on the number of migrants to Britain will damage the economy.

The assertion, an apparent blow to David Cameron’s authority, came in response to the government’s consultation on imposing a cap on immigration; and was leaked Thursday night.

Lobbying on behalf of the City of London, Johnson elaborated: ‘A major rethink of Government policy is required’ as the cap would ‘have a significant negative and disproportionate impact on London’.

The City of London seeks to lure top talent from around the world to its boardrooms. In fact, the City has already lashed out at the proposal. Already, law and other organisations have come out to say the cap will prevent the City from flourishing.

The London Mayor said it will ‘put the economic recovery at risk by creating skills gaps and placing London at a competitive disadvantage in the global competition for talent and inward investment’.

Arguing that the foreigners make a ‘substantial contribution to the UK economy’, he asserted businesses were ‘unanimous in their opposition and hostile to the proposal’.

‘They warn that the limit will damage small, medium and large businesses, prevent inward investment, talent and trade opportunities coming to London, and thereby materially damage London’s competitiveness,’ he said.

The Law Society has also made clear its plans to contribute to the ongoing consultations by the Home Office and the UK Border Agency’s migration advisory committee (MAC) on the proposals. These are due to close in September.

Law Society chief executive Desmond Hudson said just when they were pulling themselves out of a crippling recession, imposing the cap now would strangle City law firms and in turn hit the businesses they act for.

By imposing a cap, there was a mistaken assumption that there would be lawyers of equal expertise in the UK and EU. But it was often the knowledge of a particular overseas jurisdiction which was of value to a firm."

Bringing to the fore the risks of severing links with the world’s largest economies, including China and India, the Law Society argued that migrant lawyers were making a significant contribution to the UK economy.

A frontrunner in the contest for being the leader of the opposition Labour party, Miliband only recently asserted the British government plans to place the cap on non-European migrants coming to the UK were “stupid”.

Elaborating, he asserted the current migration was mainly fuelled by Europeans; and not non-European migrants.